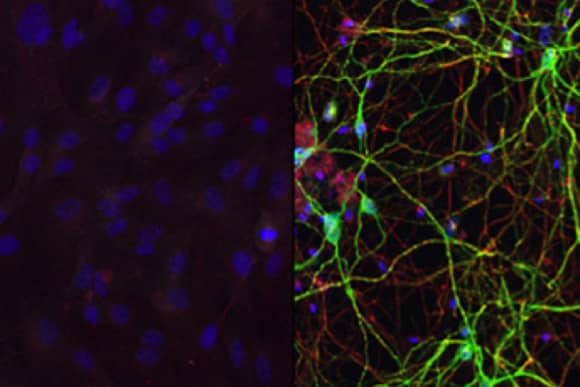 Until now, we have seen a number of medical treatments involve a process in which one type of human cell is converted to another, such as stem cells being converted to skin cells. During this process, there’s a stage called the stem cell stage, where the original cells are at risk of converting into multiple types of cells, rather than the single, desired type. But now a team of scientists from Washington University School of Medicine in St. Louis, US, has figured out how to avoid the stem cell stage altogether, and have successfully converted skin cells directly into functioning brain cells.

The team produced a specific type of brain cell called a medium spiny neuron. These nerve cells are important for controlling movement of the body and are the main cell type affected in Huntington’s disease. Researchers have published their findings in the journal Neuron, in which they have reported that the cells were implanted in the brains of mice, and survived for at least six months.

The team grew the human skin cells in an environment that resembled that of brain cells. Next they exposed the cultured cells to two microRNAs – small non-coding molecules – that unravelled the DNA needed for brain cells. The next hurdle was to reprogram the cells into specific medium spiny neurons, and this was done by exposing them to transcription factors – molecules that control the activity of a gene.

However, the team is now reprogramming cells taken from patients with Huntington’s disease into medium spiny neurons, using this method. This new approach presents the possibility of using a patient’s own cells in regenerative medicine, drastically reducing the risk of the cells being rejected by the immune system. For more details, hit the links below.

Scientist Discovered Plants Talk To Each Other Using Language

Man Never Leaves His Dream : A Dutchman Flaps His Arms And Flies Like Birds