IBM’s cognitive computing chip functions like a human brain and it developed as part of a DARPA project called SyNAPSE (Systems of Neuromorphic Adaptive Plastic Scalable Electronics), IBM’s so-called neurosynaptic computing chip features a silicon core capable of digitally replicating the brain’s neurons, synapses and axons. Researchers took a dramatic departure from the conventional von Neumann computer architecture, which links internal memory and a processor with a single data channel, which allows for data to be transmitted at high. IBM’s two prototypes have already demonstrated the ability to navigate, recognize patterns and classify objects, though the long-term goal is to create a smaller, low-power chip that can analyze more complex data…………….. 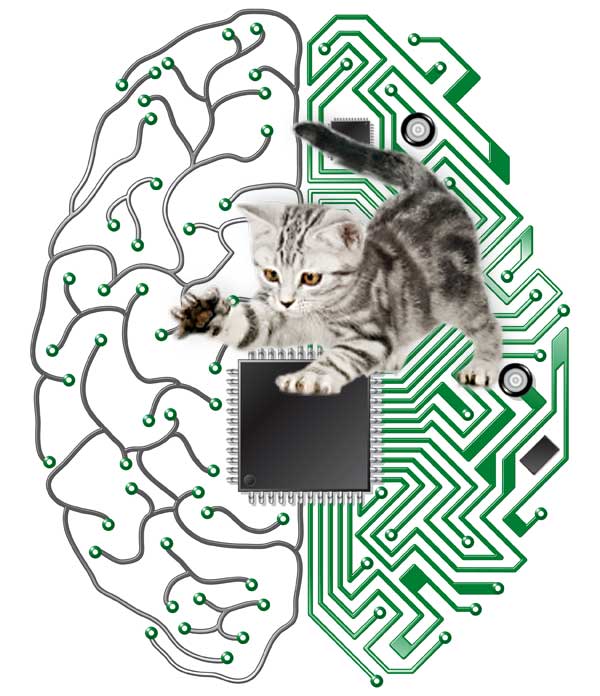 IBM researchers unveiled a new generation of experimental computer chips designed to emulate the brain’s abilities for perception, action and cognition. The technology could yield many orders of magnitude less power consumption and space than used in today’s computers. In a sharp departure from traditional concepts in designing and building computers, IBM‘s first neurosynaptic computing chips recreate the phenomena between spiking neurons and synapses in biological systems, such as the brain, through advanced algorithms and silicon circuitry. Its first two prototype chips have already been fabricated and are currently undergoing testing. Called cognitive computers, systems built with these chips won’t be programmed the same way traditional computers are today. Rather, cognitive computers are expected to learn through experiences, find correlations, create hypotheses and remember and learn from the outcomes, mimicking the brains structural and synaptic plasticity. To do this, IBM is combining principles from nanoscience, neuroscience and supercomputing as part of a multi-year cognitive computing initiative. The company and its university collaborators also announced they have been awarded approximately $21 million in new funding from the Defense Advanced Research Projects Agency (DARPA) for Phase 2 of the Systems of Neuromorphic Adaptive Plastic Scalable Electronics (SyNAPSE) project. The goal of SyNAPSE is to create a system that not only analyzes complex information from multiple sensory modalities at once, but also dynamically rewires itself as it interacts with its environment – all while rivaling the brain’s compact size and low power usage. The IBM team has already successfully completed Phases 0 and 1.

“This is a major initiative to move beyond the von Neumann paradigm that has been ruling computer architecture for more than half a century,” said Dharmendra Modha, project leader for IBM Research. “Future applications of computing will increasingly demand functionality that is not efficiently delivered by the traditional architecture. These chips are another significant step in the evolution of computers from calculators to learning systems, signaling the beginning of a new generation of computers and their applications in business, science and government.” While they contain no biological elements, IBM‘s first cognitive computing prototype chips use digital silicon circuits inspired by neurobiology to make up what is referred to as a neurosynaptic core with integrated memory (replicated synapses), computation (replicated neurons) and communication (replicated axons). IBM has two working prototype designs. Both cores were fabricated in 45 nm SOI-CMOS and contain 256 neurons. One core contains 262,144 programmable synapses and the other contains 65,536 learning synapses. The IBM team has successfully demonstrated simple applications like navigation, machine vision, pattern recognition, associative memory and classification. IBM‘s overarching cognitive computing architecture is an on-chip network of light-weight cores, creating a single integrated system of hardware and software. This architecture represents a critical shift away from traditional von Neumann computing to a potentially more power-efficient architecture that has no set programming, integrates memory with processor, and mimics the brain’s event-driven, distributed and parallel processing.

IBM‘s long-term goal is to build a chip system with ten billion neurons and hundred trillion synapses, while consuming merely one kilowatt of power and occupying less than two liters of volume. Future chips will be able to ingest information from complex, real-world environments through multiple sensory modes and act through multiple motor modes in a coordinated, context-dependent manner. For example, a cognitive computing system monitoring the world’s water supply could contain a network of sensors and actuators that constantly record and report metrics such as temperature, pressure, wave height, acoustics and ocean tide, and issue tsunami warnings based on its decision making. Similarly, a grocer stocking shelves could use an instrumented glove that monitors sights, smells, texture and temperature to flag bad or contaminated produce. Making sense of real-time input flowing at an ever-dizzying rate would be a Herculean task for today’s computers, but would be natural for a brain-inspired system. “Imagine traffic lights that can integrate sights, sounds and smells and flag unsafe intersections before disaster happens or imagine cognitive co-processors that turn servers, laptops, tablets, and phones into machines that can interact better with their environments,” said Dr. Modha.

For Phase 2 of SyNAPSE, IBM has assembled a world-class multi-dimensional team of researchers and collaborators to achieve these ambitious goals. The team includes Columbia University; Cornell University; University of California, Merced; and University of Wisconsin, Madison. IBM has a rich history in the area of artificial intelligence research going all the way back to 1956 when IBM performed the world’s first large-scale (512 neuron) cortical simulation. Most recently, IBM Research scientists created Watson, an analytical computing system that specializes in understanding natural human language and provides specific answers to complex questions at rapid speeds. Watson represents a tremendous breakthrough in computers understanding natural language, real language that is not specially designed or encoded just for computers, but language that humans use to naturally capture and communicate knowledge. IBM’s cognitive computing chips were built at its highly advanced chip-making facility in Fishkill, N.Y. and are currently being tested at its research labs in Yorktown Heights, N.Y. and San Jose, Calif.