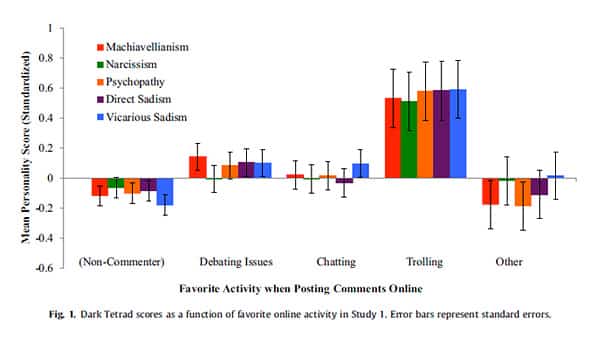 With the explosive growth of social media networks in recent years, a curious phenomenon known as ‘internet trolls‘ has emerged. A new study sheds light on this, revealing that those who fall in this category are typically sadistic, narcissistic, psychopathic and Machiavellian. Trolls on internet are usually synonymous with abuse, hate speech, irrelevant discussions and the hijacking of threads to make noise of their own. They are found across all social media networks and at virtually all public places on the internet. Their trademark is abusive language and either an inability to stick to the topic at hand or a deliberate tendency to stray away from it.

A new psychology paper by Erin Buckels and colleagues at University of Manitoba reveals more about the defining traits of these trolls. Buckels and other authors of the study aimed to find out if there were any common features between different internet trolls. The conclusions that they reached are quite revealing. According to their findings, most internet trolls fall in a category called Dark Tetrad. This typically comprises of narcissism and self-obsession, sadism, psychopathy characterized by a lack of empathy and Machiavellianism which shows that they tend to be clever in that they manipulate others to their own ends.

What is even more intriguing is that the study reveals a direct correlation between the time spent on the internet commenting, and the tendency to be a troll. In other words, the more time you spend commenting at online forums, sites or networks, the more likely you are to be a troll. A further investigation into the reason for this may suggest an implicit detachment from their immediate reality as the culprit.

However, it must be noted that only a minor percentage of internet users turn out to be trolls. Among the respondents to the survey that Buckels used for the study, only 5.6% said that they enjoyed trolling while more than 40% didn’t like to engage at public forums at all.

Speaking about whether punishment of some sort may curb online trolling, Buckels responds in the negative, “Because the behaviors are intrinsically motivating for sadists, comment moderators will likely have a difficult time curbing trolling with punishments (e.g., banning users). Ultimately, the allure of trolling may be too strong for sadists, who presumably have limited opportunities to express their sadistic interests in a socially-desirable manner.”

Wine Waste Can Be Used To Create Bio-fuels And Medicines