The world under the sea is really mysterious. If one mystery is solved, two arises instantly. Lately, a group of scientist has generated a new map of the ocean floor using radar satellites. According to that map, scientists have discovered thousands of mountains under the sea. 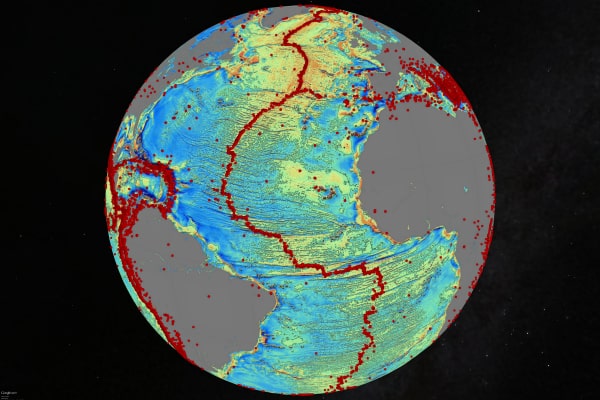 This map which scientists has created is twice as accurate as the last map of the ocean floor, which was created nearly 20 years ago. This new map will help scientists to explore some of the 80 percent of the ocean’s floor which, incredibly, has never been explored or mapped by humans. The new map has already the scientists discover an extinct ridge in the Gulf of Mexico, which was buried deep under layers of sediment about 150 million years ago, as well as the fracture zone where Africa and South America separated.

The map also show thousands of previously unseen mountains, called seamounts, rising from the ocean floor. These seamounts were once active volcanoes, and they stretch around one kilometer along the sea bed, and reach up to two kilometers high. These elevated seamounts are a hotspot for marine life, and knowing their location can help with conservation management.

David Sandwell, lead author of the study, said in a press release, “The kinds of things you can see very clearly are the abyssal hills, the most common landform on the planet.”

By using European Space Agency’s (ESA) CryoSat-2 satellite, which maps the Earth’s gravitational field, and NASA’s Jason-1 spacecraft, which monitors ocean currents, scientists collected some new data about the oceans. After gathering the data, the team used a computer program to generate a marine gravity model that is twice as accurate as the previous map made in 1997.

Don Rice, program director of the US’s National Science Foundation’s Division of Ocean Sciences, the organisation which funded the research, said, “The team has developed and proved a powerful new tool for high-resolution exploration of regional seafloor structure and geophysical processes. This capability will allow us to revisit unsolved questions and to pinpoint where to focus future exploratory work.”

The new data will greatly help in creating Google’s latest version of ocean maps, and will give scientists information in regards to previously unknown territory. The team hopes to refine the resolution of the model, and explore further with a satellite dedicated to this mission. Scientists have published the the new map and their findings in the journal Science.

[Video] How To Turn A Shoe Box Into A Phone Projector

Top 7 Secret Apps To Hide Your Private Photos And Files