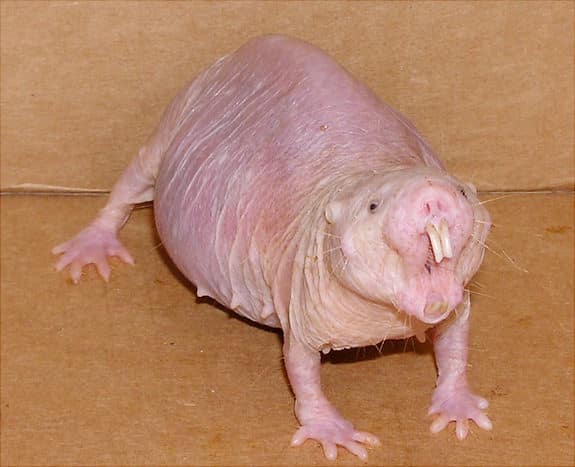 Naked mole-rats (Heterocephalus glaber) are one of the most bizarre mammals known to science. They have almost no hair, hence their name, and have large protruding incisors. However, the very interesting thing is scientists have said that naked mole rats could help people live longer! According to scientists at the University of Illinois in Chicago, one of several premier research institutions dedicated to figuring out how the naked mole rat does that sort of thing, the naked mole rat lives about six feet underground, in caverns and tunnels that can stretch on for two miles, in air that is so putrid and oxygen-deprived it would be fatal or lead to irreversible brain damage in any other mammal. Scientists have revealed that the closest relatives of naked mole rat, mostly mice and rats, usually live for only about three years. But the naked mole rat can hang on for more than 30 years, and remain healthy and presumably happy right up to the end. Based on these facts a collaborative of researchers in Israel and the United States is working to uncover the secret to the small mammal’s long and active lifespan. In fact, it’s kind of a new era in various lines of research. Dr. Dorothee Huchon of Tel Aviv University’s Department of Zoology, Prof. Rochelle Buffenstein of the University of Texas Health Science Center in San Antonio, and Dr. Yael Edrey of the City College of New York are working together to determine whether the naked mole rat’s unusually high levels of NRG-1, a neuroprotecting protein, is behind the naked mole rat’s three-decade life span. Because rodents have an 85 percent genetic similarity to humans, it may hold the key to a longer and healthier life for us as well. Here’a video for you.

It the scientists could fully unravel the naked mole rat’s long and active lifespan, then we might be able to eliminate cancer, prevent strokes, reduce pain, keep our brains working longer, and beat back the debilitating effects of the aging process. Besides, we might be able to live for 300 years. Scientists have published their research in the science journal Aging Cell.