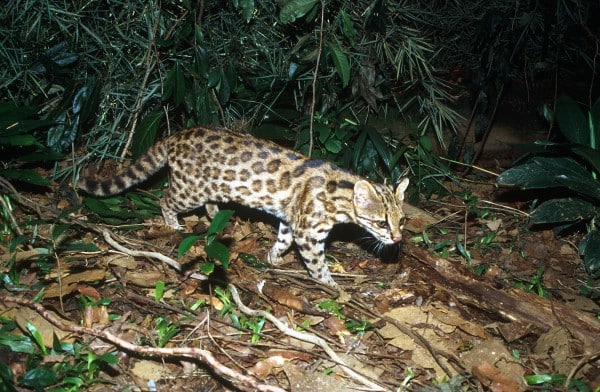 There are some cats, for example, Margay and the Ocelot, who are well known as a little tiger cats as they have small spots like Leopards on their body. However, lately researchers have discovered a new cat called Oncilla in Brazil, who has also many small spots like the Leopard and researchers claim that this cat has come from a different species elsewhere on the continent. The Oncilla is also known as the little spotted cat, tigrillo, or tiger cat. It is one of the smallest cats in South America and weighs no more than 3 kilograms (about 6.5 lbs). Most of the time, this species remains active during the night and in twilight, but very often it also remains active during the day when necessary. This cat primarily lives on the ground. They are agile tree climbers and feed on birds and small mammals like rodents. However, Oncilla has a rich ochre coat, spotted with black rosettes. This cat is widely found in tropical rainforests of Central America and South America. The Oncilla is a close relative of the Margay and the Ocelot. In other words, Oncilla is virtually identical to the Ocelot and Margay. But the very interesting thing is not all the Oncillas are the same.

Lately, researchers have found such Oncillas in northeastern Brazil that belong to a different species from those elsewhere on the continent, although they look virtually identical. Researchers analyzed the genetic material of Oncillas in northeastern Brazil, and compared them with other nearby Oncillas living in the south. They found that there was no flow of genes between the two populations of Oncillas, and hasn’t been any for millennia. This, along with other genetic differences, led researchers to conclude the two populations do not interbreed and are in fact different species.

According to Eduardo Eizirik, a researcher at Pontifical Catholic University of Rio Grande do Sul in Brazil, said that the study “illustrates how much is still unknown about the natural world, even in groups that are supposed to be well-characterized, such as cats. In fact, there are many basic aspects that we still don’t know about wild cats, from their precise geographic distribution and their diets to even species-level delimitation, as in this case.”