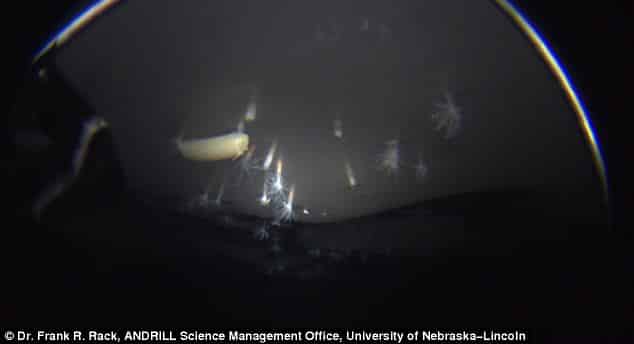 During the test-drive of an advanced camera-equipped robot under the Antarctica Ross Ice Shelf, scientists have discovered an entirely  new species of sea anemones which lives upside-down by hanging from the ice. The ice was first drilled so that the robot could be sent down into the water under the icy layer. It was a part of the NSF-funded Antarctic Geological Drilling Program. The underwater robot was a 4.5 foot cylinder fitted up with two cameras through a hole bored into the ice.

The location of this hole was at a place where the ice formed a whopping 270-meter thick shelf. Once the ice was drilled away, the robot was lowered into the water. It was here that the robot made some startling discoveries, among which was the first-ever seen species of sea anemones. This strange species uses the sea shelf above them as the floor and hang from it so that with their tentacles open, they look like flowers hanging from the ceiling. In their contracted size, these anemones appeared less than an inch long. The find has immense significance because it further affirms the possibility that Jupiter’s moon, Europa, may contain life since it is similarly icy.

Apart from these sea anemones, the scientists also spotted such fish which swam upside down as well as a strange creature they named ‘eggroll‘ since it looks like a four-inch long cylinder with a diameter of one inch. Although the robot was originally meant simply to be used for underwater navigation and exploration, scientists were able to use it to retrieve some samples of these species for further study.

Lip Reading Is Still Too Hard For Computers