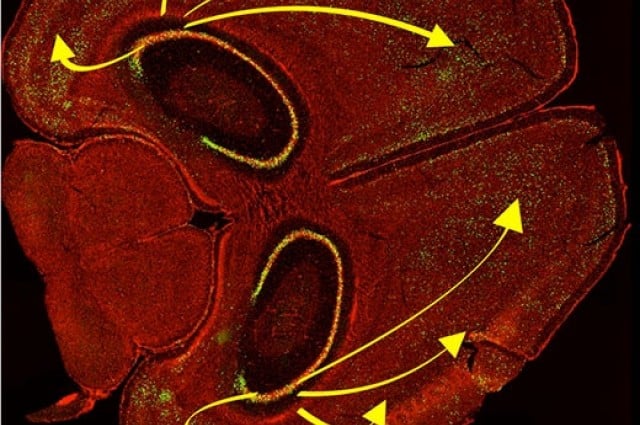 The successive perusals of manipulating memories have opened up a new path, for scientists have successfully managed to erase particular memories of a batch of mice that were under experiment. Previously, a theory was established that memories that are developed episodically are stored in particular parts of the brain: the cerebral cortex and hippocampus of the brain need to act in harmony in order to retrieve or relive those memories. Scientists assumed that they could study or even manipulate these memories by using light, but due to insufficient technology needed to initiate the experiment, they could not prove it. In the past few years, scientists implanted human brain cells into mice to boost their ability, but this time the study goes even further.

The process used to achieve the result is called Optogenetics, and it deals with usage of light in order to study brain cells. In this study, the scientists used mice with genetically modified nerve cells, which emitted green fluorescent when the cells became active, and thus made it possible to be studied. This emission could be turned on and off at will with the help of a fiber cable that was connected to the brains of those mice. The scientists then evaluated the formation of memory within the mice and tracked their paths for possible manipulation.

The next step included forming bad memories in the mice, which were done by using shock when they entered a particular cage. After the formation of the ‘fearful memory’, the mice stopped their exploration whenever they came to that cage, which signified that they had associated a memory with that cage that brought them bad experience. The fluorescent signals assisted the scientists in identifying the specific cells associated with learning and storing. Next, the scientists used light to turn off those nerve cells, and the mice forgot about their unpleasant memories and entered the said cage again.

The experiment was led by Kazumasa Tanaka, Brian Wiltgen and some of their colleagues, and is being considered as a great advancement in medical science, especially for treating PTSD patients.