It is strongly believed that once upon a time a lot of dinosaurs lived in our world. But later they all became annihilated. We really don’t know, how they vanished? But a study says with evidence that an asteroid killed the dinosaurs! 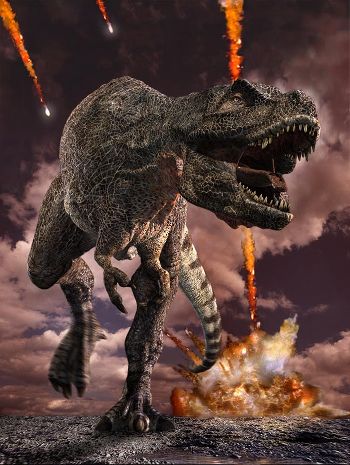 For long time many scientists have theorized that once upon a time a giant asteroid struck in Earth for which roughly 75% of the planet’s species, including almost every dinosaur were demised. But anyhow the topic remained murky. But now, a team of American and European researchers have shed new light on the incident, giving an extra weight to that widely-adopted theory.

After spending a year, some American and European researchers found that 66 million years ago a giant asteroid ( roughly 15 km) wide) hit Chicxulub, Mexico. The collision left behind a 180-kilometer (110-mile) crater, released 420 zettajoules of energy (1 zettajoule (ZJ) is equal to 1021 joules) which is equivalent to 100 teratonnes of TNT. It was roughly two million times stronger than the largest thermonuclear device. However, the impact created a huge dust cloud that blocked out the Sun, starting the extinction ball rolling by killing off much of the world’s plants, and thus the herbivores soon after. Due to high levels of oxygen in the Cretaceous atmosphere, the impact might have caused intense, global firestorms that killed off many other species.

Previous studies have estimated that the asteroid impact occurred around 300,000 years before the dinosaurs’ demise. But lately European and American scientists have re-tested the debris from Chicxulub, Mexico and found that the asteroid was simply the zettajoule stick that broke T-Rex’s (a dinosaur) back.

You will find more details in Science and Live Science (Discovery News).

Study Finds Plants Can Hear Themselves Being Eaten, Become Defensive When Attacked…

Dinosaurs Extinct Because Of A ‘Nuclear Winter’ After Asteroid Strike