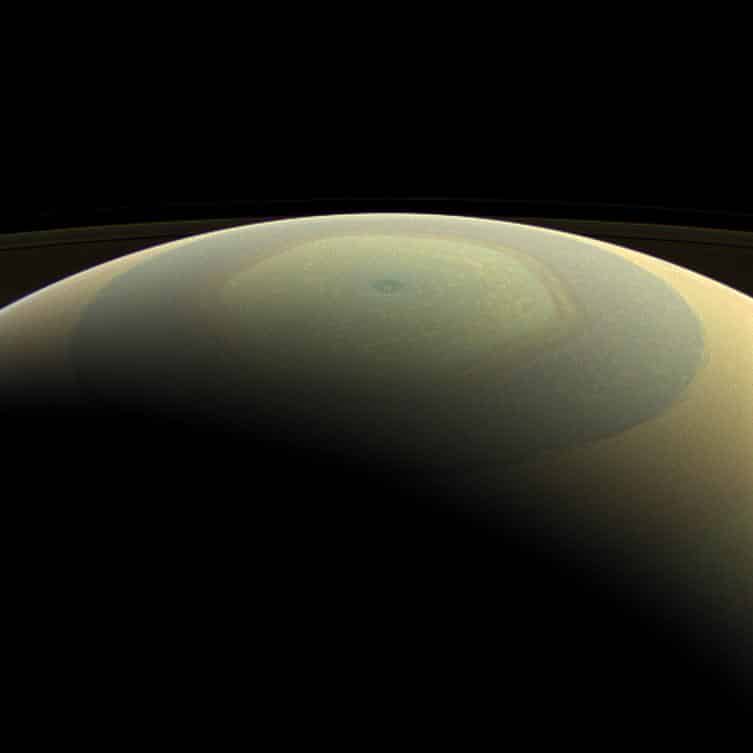 View Of Saturn From Cassini Spacecraft

Earlier we have seen Cassini capturing colorful photos of Saturn and its largest moon Titan. Lately, NASA has revealed some incredible image of Saturn and two of its Moons, captured by Cassini earlier this year. Saturn is the sixth planet from the Sun and the second largest planet in the Solar System, after Jupiter. On the other hand, NASA launched Cassini in 1997 and the spacecraft arrived in the orbit of Saturn in 2004. Since then, Cassini has been studying Saturn and its rings and moons. It is believed that Saturn has at least 150 Moons and satellites of various sizes. Until now, 62 moons have been discovered in orbits around Saturn, and 53 of them have been officially named. However, earlier this year Cassini captured some fabulous incredible images of Saturn and two of its Moons – one is Titan and the other is Enceladus.

In the above image, Saturn is seen in natural color and it seems that the planet has resembled an ornament with a jet stream swirling at its north pole along with a hurricane-like storm. The characteristic hexagonal shape of Saturn’s northern jet stream, somewhat yellow here, is visible. At the pole lies a Saturnian version of a high-speed hurricane, eye and all. Cassini took this image through its wide-angle camera on July 22, 2013.

The above image shows that winter is approaching in the southern hemisphere of Saturn and with this cold season has come the familiar blue hue that was present in the northern winter hemisphere at the start of NASA’s Cassini mission.

The above image show that Saturn’s largest moon Titan is slipping into shadow. But, the south polar vortex at Titan still stands out against the orange and blue haze layers that are characteristic of Titan’s atmosphere. The hazy atmosphere of Titan also reveals that Titan has hydrocarbon lakes. Cassini took this image with its narrow-angle camera on Oct. 7, 2013.

In this above image, Saturn’s Moon Enceladus is covered in snow and ice. It seems like it’s a snowball. The image was taken with the Cassini spacecraft narrow-angle camera on March 10, 2012, using filters sensitive to ultraviolet, visible and infrared light.

Linda Spilker, the Cassini project scientist said, “Until Cassini arrived at Saturn, we didn’t know about the hydrocarbon lakes of Titan, the active drama of Enceladus’ jets, and the intricate patterns at Saturn’s poles. Spectacular images like these highlight that Cassini has given us the gift of knowledge, which we have been so excited to share with everyone.”

NASA Planning To Do 3D Manufacturing On Space

Scientists Believe Moon Is 100 Million Years Younger Than The Earth