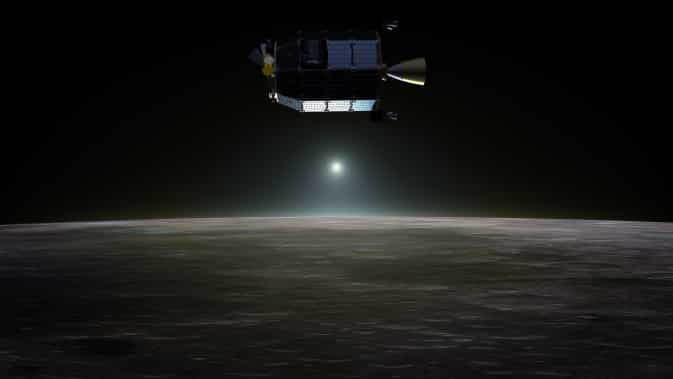 Remember NASA’s spacecraft Lunar Atmosphere and Dust Environment Explorer (LADEE) which the agency had launched on September 7, 2013, in order to study the lunar exosphere and dust in the Moon’s vicinity? Well the exciting news is that NASA has reported that LADEE will crash into Moon this month. LADEE (the name is pronounced “Laddie”) is equipped with a dust detector, a neutral mass spectrometer, and an ultraviolet-visible spectrometer, as well as a technology demonstration consisting of a laser communications (lasercomm) terminal. One month later (on October 6, 2013) since launch, LADEE entered the lunar orbit and started orbiting. After that, LADEE made a new space data transmission record of 622 Mbps between the Moon and Earth and created a new hope at NASA that in future the agency might be able to see 3D videos of space from Earth. However, before launching LADEE, NASA had mentioned that LADEE would spend 100 days for scientific mission.

Last Thursday, NASA held a press conference and mentioned that due to lack of fuel to escape Moon’s lunar orbit, LADEE will crash into the Moon on or before April 21. At the press conference LADEE project scientist Rick Elphic told reporters, “If you hit anything at 1,600 meters (5,250 feet) per second, that’s not a landing you walk away from, so it’s by no means gentle. This is a very, very high-speed impact, and even though there’s a possibility of tumbling across the surface, there’s nothing gentle about it. You [LADEE] will be destroyed.”

NASA has confirmed that the impact will neither destroy the Moon nor affect its orbit. Besides, the Moon will not look any differently than it does today. NASA has also mentioned that no one will be able to see anything around the LADEE impact and its Lunar Reconnaissance Orbiter (LRO) may be able to find the LADEE impact site in the coming months. Additional information regarding the impact is available on NASA’s LADEE website.

On the other hand, NASA has made a contest named ‘Take the Plunge LADEE Impact Challenge.’ The space agency has called on the general public to make their best guess at when the impact will occur. Winners will receive a personalized NASA commemorative certificate.

Update: LADEE didn’t have sufficient fuel to control its orbit. And finally, last night (US time), LADEE smashed into the lunar surface. The exact moment of impact isn’t clear, since the precise terrain it hit couldn’t be determined in advance, but what is clear is that the impact destroyed the probe.

Get Ready For A Brilliant Meteor Shower This Saturday