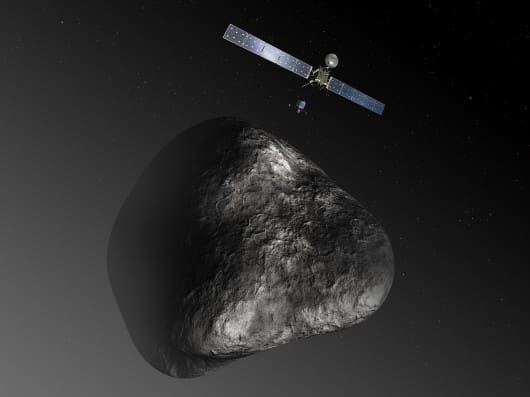 Rosetta space probe was launched back in 2004 but went into hibernation in June 2011 after it was positioned so that its solar arrays stopped working. After 31 months of hibernation, the probe has finally resumed functioning. The probe was intended to chase after 67P/Churyumov-Gerasimenko comet. However, in 2011 the probe had to undergo some complex maneuvers in order to gain some velocity in going after the comet. The maneuvers rather sent it at a distance of some 800 million km from the Sun which is when its solar array stopped working optimally.

As a result, the power required to keep the probe working was not sufficient and it went into hibernation. It had been a whopping 31 months since then and the probe drifted to a distance of 673 million km from the Sun in the meanwhile. At this position, the solar arrays were finally able to muster enough power again and the probe’s systems were reactivated.

The reactivation took place at exactly 10:00 GMT this morning. As soon as the systems resumed, a signal was sent to our planet and was received 45 minutes later by NASA’s Goldstone ground. It was then forwarded to mission control in Germany. Naturally, the occasion is that of jubilation at ESA which views Rosetta as a critical spacecraft in examining the comet mentioned above.

Commending the resumption of operations at Rosetta, ESA’s Director of Science and Robotic Exploration stated, “With Rosetta, we will take comet exploration to a new level. This incredible mission continues our history of ‘firsts’ at comets, building on the technological and scientific achievements of our first deep space mission Giotto, which returned the first close-up images of a comet nucleus as it flew past Halley in 1986.”

The most pressing task for the probe, and for the ESA personnel overlooking its movement, is to ensure that the probe goes back after the comet. Currently, it is some 9 million km away from the comet and it will take a while before it resumes its normal orbit. Scientists intend to correct its orbit in late May and bring the probe closer to the comet so that it will be able to snap images of it.

The planned tasks for Rosetta involve mapping the orbit and nucleus of the comet and to further discern the nature of the gases expelled by it as it moves around in space. In fact, the space agency also intends to have the probe launch another probe, called Philae, which will descend down on the surface of the comet, analyze its composition and then send back the images for scientists to study.

Falcon 9 Block 5- The Dream Toy of Every Astronaut!