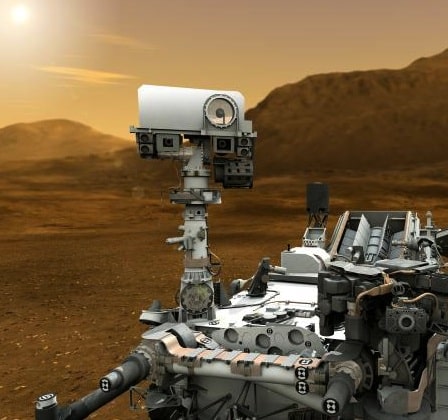 Humanity has taken a leap forth in terms of knowledge with the successful landing of NASA’s new Mars rover – Curiosity. Curiosity finally landed on the red planet on Sunday night. The rover packs a range of high-tech science gears which will help it explore the planet in detail. The overall size of Curiosity is that of a small SUV, yet it has all it takes to make many high-tech analysis and discoveries. For the next two weeks, the rover will be under engineering tests and checks, after which it will start the exploration of Mars.

The duration of this mission is two years, during which the rover will be able to operate through night and day, thanks to its nuclear-powered battery. The exploration will be conducted around a 3-mile high mountain in the middle of Gale Crater. Curiosity will be exploring this region in detail.

Given below are brief details about the range of gears with which Curiosity is equipped.

Mars Science Laboratory Entry Descent and Landing Instrument (MEDLI): This equipment is chiefly concerned with the descent and landing of the rover on the surface of Mars. Since the descent has been successful, we can say that the equipment has done its job well.

Mars Descent Imager (MARDI): MARDI is a special camera which is to be used to gather images during the descent of the rover. In the landing, MARDI has been critical in that it provided images to NASA geologists back home and helped them find the right place to land the rover. The earliest images from the rover have probably been coming from this camera.

ChemCam: ChemCam seems like something out of spy movies. It can emit a laser beam, up to a distance of 23 feet. This beam will be used to vaporize different parts of rocks on Mars. The vapors will then be analysed with a spectrograph to know the composition and chemistry of the rocks. Scientists expect that with ChemCam, they will be able to gather a lot of valuable information about the minerals present on Mars’ surface.

Chemistry and Mineralogy (CheMin): The CheMin instruments will examine the samples Curiosity will drill from different rocks. Once the samples reach CheMin, it will bombard it with X-rays to discern the formation as well as history of these samples.

Alpha Particle X-Ray Spectrometer (APXS): APXS is situated right at the end of Curiosity’s arm which means that it can be directly pitted against rocks and soil on Mars. APXS will then use Helium nuclei to find out the identity and formation of different materials.

Rover Environmental Monitoring Station (REMS): Keeping up with the weather is really important for Curiosity. And that is where the role of REMS comes in. REMS will keep updating the rover about wind speeds, humidity, air temperature and other such details.

Sample Analysis at Mars (SAM): SAM comprises of more than half the body of Curiosity and is probably the most important part of the equipment. It has a mass spectrometer to identity elements, a gas chromatograph to vaporize and analyse different materials as well as a laser spectrometer to discern the presence of lighter substances such as oxygen, nitrogen and carbon.

MastCam: MastCam comprises of two cameras which can record images as well as color video and can also stitch them into panorama views. One of these cameras has a high-resolution lens. These cameras are our hopes of finally getting a detailed, video look at the landscape of Mars.

Apart from these equipments, Curiosity is equipped with many other cameras providing close views and analysis as well as Hazcams and Navcams which will help the rover with its navigation. In all, the rover has all that it takes to make a detailed mission over a long period of time. We sincerely hope that this rover will finally enable mankind to study Mars in detail.

NASA’s Next Mars Rover Will Search For Ancient Life