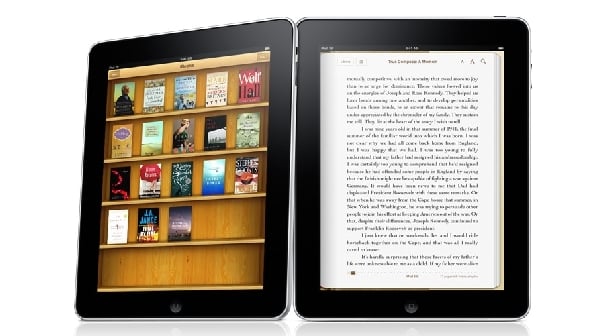 Apple has just announced that it will be taking on primarily Amazon, with the launch of its own “iBook” store. Here they allow users to buy and read books from a number of different publishers will go up directly against Amazon’s Kindle offering, however the iPad offers the full interactivity of a colour screen, video support and more.

The iBooks app will function as an eReader, and users can download titles from the new iBooks store, starting today. Apple announced partnerships with five major publishing houses including Penguin, HarperCollins, Simon & Schuster, Macmillan, and Hachette.

When you will purchase a book, it will be placed and displayed on your personal bookshelf. To read a book, simply tap it and it will open up. You are then able to tap to change pages or swipe, and you can choose different fonts and text sizes to suit your needs.

The books, which look to be priced from around $7.99 to $14.99, will be available from at least five major publishers, with Steve Jobs giving credit to Amazon as it announced the launch.

“Amazon has done a great job of pioneering this… we’re going to stand on their shoulders for this”, said Jobs.
Source:pocket-lint.com