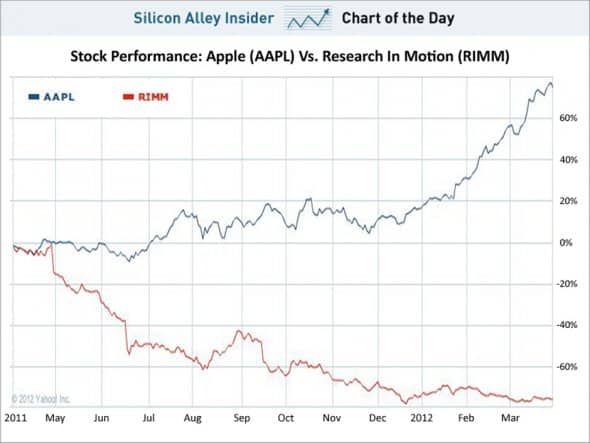 Apple has been on a roller-coaster ride of success, fame and popularity for quite some time now. It has emerged as a truly international brand in recent times and has proved its mettle with the persistent dominance of iPhone, in the smartphone world, and iPad in the tablet market. RIM, on the other hand, is undergoing an exactly opposite transformation. Here’s a chart that well illustrates this. Jim Maiella has posted a chart which depicts the journey of RIM and Apple, side by side, but in more or less the opposite direction. The chart typically depicts the value of Apple and RIM’s shares in the stock market. But it is very clearly indicate of the overall performance of the two.

While Apple has been on a high tide, which keeps getting higher by each passing months, RIM has been on a downward spiral with its share in the smartphone market dwindling and its flagship BlackBerry an increasingly rare choice by users. RIM’s tablet hasn’t been a success either and the company had to do away with a lot of top-slot positions in recent past in an attempt to make a fresh start. So far, this doesn’t seem to be happening though RIM has its hopes pinned to BlackBerry 10 devices which are still to debut.