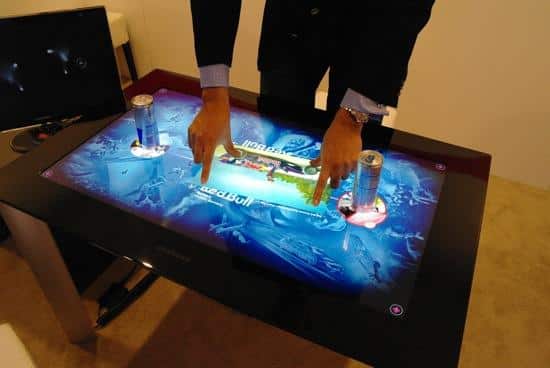 A fresh new project developed by Microsoft and Samsung, officially called Samsung SUR 40 is rumored to offer touch screen capabilities to large screens such as 40-inch HD displays. The new project is based on “PixelSense” technology, which pairs every RGB pixel with a “camera” pixel that allows the device to sense where the user places his or her fingers or palms. The means the TV screens are multi person, multi touch. The visitors at this year’s Consumer Electronics Show were able to experiment the device and noticed that the display was able to track 50 or more fingers which clearly makes the display multi user, but also the technology is able to track the fingers’ orientation and the pressure of the touch. The new features introduced by Surface 2 let users experiment with a new set of applications, such as “Da Vinci,” software helping wannabe artists develop their skills, by using digital brushes of different thicknesses to paint their masterpieces.

Surface 2 allows “a natural kind of human/display interaction that could lead to all sorts of new applications,” as Lance Ulanoff analysts for Mashable explains. The people who have been seduced by the possibility of having a large display with a set of new multi touch features should know that Sur 40 Microsoft Surface 2 comes with a price tag of $9,000.

Consumers May Get $3.06 Per Book Over Apple eBook Settlement