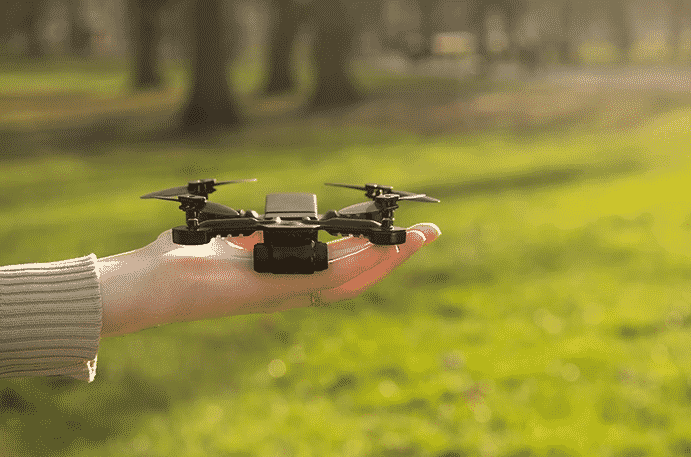 Hold the Drone up, click the power button three times and the Drone launches from your hand so you can be flying in seconds. This has been made possible through the self hovering flight controller. This is how simple using the Micro Drone 4.0 is. Moreover, it also supports automated flight maneuvers. Apart from being the smallest professional Drone in the market, it comes with many advanced capabilities. Firstly, it supports 360-degree Orbit. Secondly, it also comes with Cable Cam, this allows you to reverse drone orientation to fly aircraft backward from launch location and fly away. And last but not least, it can identify human palm. What does it do after that? It usually initiates this process when you want the Drone to land. After it has identified a Human Palm it will Visually search for it to initiate landing in hand with extended palm.

If you have a very low budget for a Film-project as well as limited man-power, Micro Drone might be the ideal solution for you to get the required Aerial Footage. Micro Drone 4.0 is the next generation palm-sized Drone bridging the gap between entry level and very expensive professional videography quadcopters. It is autonomous which means, when you release all the controls, it will take a stand-still position. This way you get an extra hand to perform other tasks.

Moreover, you can benefit from this feature while taking continuous shots. You can release all the controls when you want to switch to a new shot and Micro Drone will hold altitude and prevent drift. You don’t even need to bring it back to the ground before launching it back again for the next shot. Also, Micro Drone hosts a camera that is similar to surgical cameras, which allows Micro Drone 4.0 to automatically hover on spot for hands-free flight control. The first priority for Videography should be quality. You can never compromise on it. Now you might be wondering would I get good quality footage using this Micro Drone? Well, the answer to that is yes you can. In fact, the Micro Drone captures HD 1080P Video. Also, there is another aspect of videography using a drone. As the drone flies, it might end up capturing completely shaky videos, which might not be of any worth. But Micro Drone 4.0 comes with a stabilizer. Despite its small size The Micro Drone 4.0 features a two-axis mechanical gimbal to eliminate that problem. A pressing issue while using Drones is, you have to check the airflow before taking your drone out for a swing. But Micro Drone makes it possible to fly it in both strong and weak breeze. It comes with an advanced Qualcomm-based flight software that enables outdoor flying in a light breeze which has been tried, tested and proven in a number of high-end consumer Drones.

Behind The Scenes Of Avatar