The military’s new wingless hypersonic aircraft, the X-51A WaveRider, will make its first test flight today (May 25). The aircraft will be carried up in a B-52 bomber, and then released off the coast of California. The wingless aircraft looks kind of like a shark, and is powered by a scramjet engine. The aircraft will fly for five minutes, during which it will reach Mach 6 and send data to ground stations before finally dropping into the Pacific Ocean. 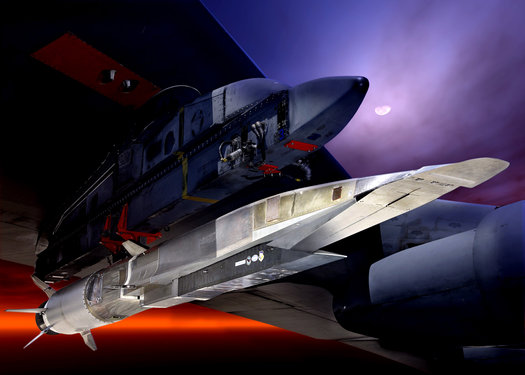 The longest previous hypersonic scramjet flight test, performed by a NASA X-43 in 2004, was faster, but lasted only about 10 seconds and used hydrogen fuel. The X-51 uses JP-7 jet fuel, the same juice that powered the SR-71 Blackbird.

NASA’s First Robot Astronaut To Be Launched Into Space…

The WaveRider is basically wingless — it has some little fins on its side — so it is designed to ride its own shockwave, hence the name. The flight will test the SJ61 scramjet engine, built by Pratt & Whitney Rocketdyne, as well as the craft’s thermal protection systems, airframe and engine integration.

Tuesday’s flight will be the third time a WaveRider has been aloft, but in the past it had remained attached to a B-52. This time, the bomber will drop the craft and a solid rocket booster will accelerate it to about Mach 4.5. Then the scramjet engine, which uses the same fuel as the SR-71 Blackbird, will push the X-51A to Mach 6 as it climbs to about 70,000 feet. Scramjets can burn atmospheric oxygen, so they don’t need to carry huge, heavy fuel tanks.

The X-51A program could pave the way to hypersonic weapons and future access to space, the Air Force says.

New Aircraft Design From MIT Could Reduce Fuel Usage By 70%