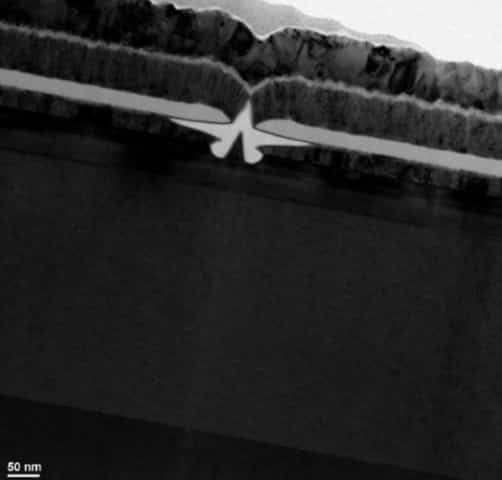 Researchers at the MIT’s Microsystems Technology Laboratories claim that they have created the smallest transistor made of Indium Gallium Arsenide (InGaAs), a semiconductor alloy used in fiber-optic and radar technologies. It is just 22-nanometer thick. Scientists believe, one day this material will replace silicon in semiconductor chips. Silicon has ruled for decades in many electronics, specially in computers. Chip makers have successfully shrunk the dimensions of electrical circuits etched in silicon that allow huge numbers of transistors to be squeezed onto chips. But the amount of power that erects through those tiny circuits is limited. Therefore there is risk of melting down the silicone chips.

After long effort, researchers from MIT have created InGaAs. Its thickness is 22 nanometers only (one nanometer is a billionth of a meter). First, the researchers used Molecular Beam Epitaxy (MBE) to grow a thin layer of indium gallium arsenide. They then used a combination of Electron Beam Lithography (EBL) and a technique whereby evaporated Molybdenum is fired at the wafer to create the three electrodes that make up the transistor: the gate, the source, and the drain. Though etching transistors much smaller than that using today’s silicon-wafer processes will be very tricky, because the smaller the transistors get, the more difficult it is to handle current efficiently. Researchers think, using InGaAs semiconductor alloy will accelerate the speed and effectiveness of processors.

Jesús del Alamo, co-developer of the material and a MIT professor, claims that this development “promises to take Moore’s Law beyond the reach of silicon.” Now the researchers will try to improve the transistor’s electrical performance and overall speed. By chance, if the researchers get success, they will go for shrinking the device smaller than ten nanometers.