Next Apple TV Will Not Use OLED

Rumours that Apple would be partnering with LG to produce a 55-inch OLED television and now Apple has turned its focus to the television market, providing a device that would possibly allow users to stream music, videos and TV shows via its iTunes platform, but Apple is currently unsure of OLED technology due to its higher cost and related issues with large-sized OLED displays. Apple will eventually switch its digital gear to OLED tech and this won’t happen until three or four more years as the company has no interest in pricing itself out of the market………… 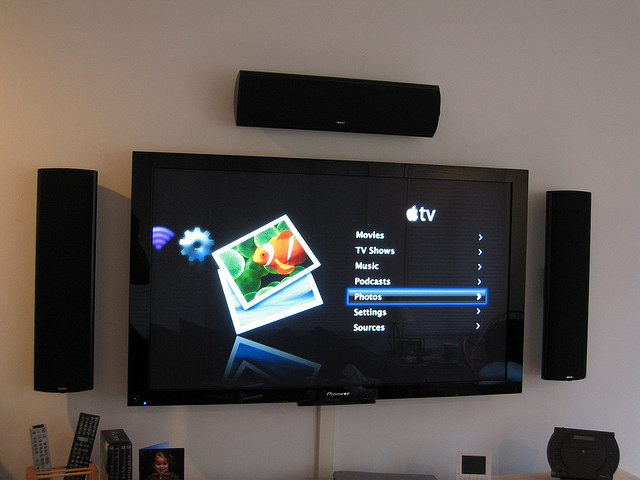 Apple, the U.S.-based consumer electronics firm, has shifted its sights to the tentatively named Apple TV, but possibilities are currently very low that the iPhone maker will use an advanced and brighter display that could eventually replace the current liquid crystal display (LCD) screens on its upcoming televisions, sources directly involved with the matter said, Monday. “It’s true that Apple has keen interest in TV, allowing users to stream music, videos and TV shows via iTunes, though that needs some iPhone and iPad integration, however, Apple is still pessimistic about using OLED displays,” said one source. “Because Apple is worried over higher costs and technology-related issues linking to large-sized OLED displays, it is groundless that Apple has asked LG Display to supply its OLED screens for its upcoming televisions,” added the source. OLED allows display manufacturers to produce exceptionally thin TVs without hurting picture quality. But the screen is still not suitable for TVs due to pending issue. Limited life span, color balance-related issues, an efficiency of blue OLED _ vital for the success of OLED replacing LED and screen burn-in are regarded the headaches, making Apple hesitate to use the displays on Apple TV. The sources claimed Apple may use picture quality-enhanced and tech-sharpened LCD displays for its televisions, as there are minor differences between OLEDs and LCDs at least to general consumers who don’t have much knowledge of displays. Apple and LG Display were said to have had discussions about access to a new 55-inch LG OLED panel that will be used in Apple TV after LG chief executive Kwon Young-soo said the Korean display-making giant plans to launch such a display sometime in mid-2012. Despite Apple’s reluctance to adopt LG OLED TV technology, market analysts and LG officials say that wouldn’t be a further blow to LG Display, which was struggling amid the drastic downturn in the global LCD market.