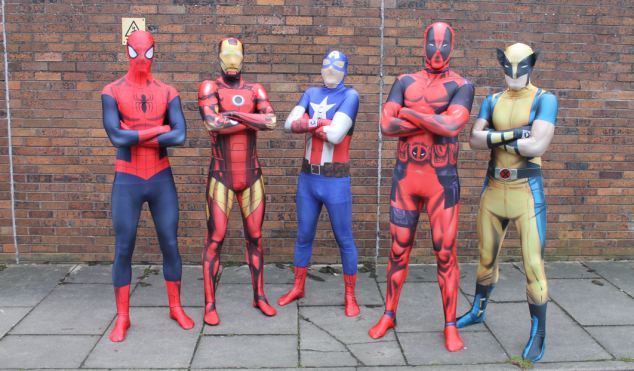 For all the comic fans who’ve fantasized of being a superhero, you can almost be one now. Morphsuits has partnered with Marvel to create skinsuits which come with augmented reality tech and give you the looks and powers of different super heroes. A number of these skinsuits are available, including ones that make you look like Wolverine, Captain America, Ironman, Spiderman and Deadpool. The best part is that you also get to have superpowers once you don on these suits, such as being able to throw webs, get Wolverine’s killer claws and Ironman’s laser attacks.

Commenting on the concept of these skinsuits, Morphsuits co-founder Gregor Lawson, “Imagine not just looking like Iron Man, but being able to fire repulsors from your palms and having a glowing Arc reactor at the centre of your chest. That was our dream, and these awesome costumes make that a reality. You can have Wolverine’s Adamantium claws, Fire Spiderman’s webbing or throw Captain America’s shield – all with the power of the Morphsuits app and its built-in augmented reality features.”

The best part is that these skinsuits come with a smartphone app. All you need to do is simply ‘insert’ this smartphone in certain slots on the skinsuits and that launches a video animation from a list. You can also use augmented reality to show off cool powers such as fire repulsors or throwing webs. These will be visible when anyone looks at you through a smartphone or a tablet.

The superhero industry is here to stay and the example of Morphsuits shows that it is getting closer to the real thing. In time, we may actually see technology incorporate more and more of ‘superhero’ abilities in these costumes.