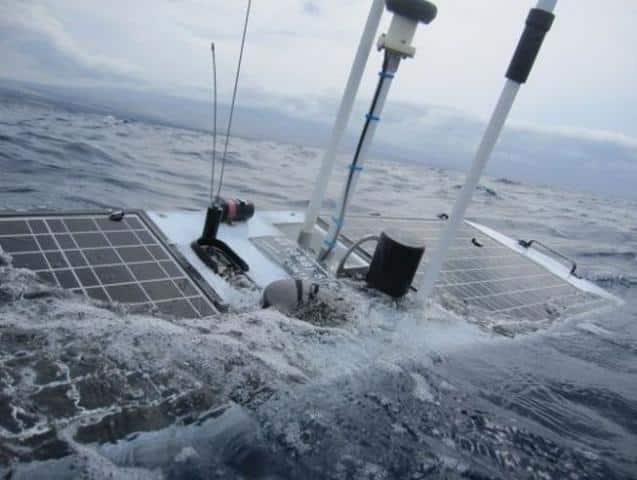 Last year in November, four wave glider robots from Liquid Robotics voyaged in sea to collect data about ocean life while travelling across the Pan Pacific from the San Francisco Bay to Japan and Australia. After spending more than one year in water, one robot has completed 9,000 mile (16,668 kilometers) journey between San Francisco and Australia and made a world record. Liquid Robotics sent four robots – Papa Mau, Benjamin, Piccard Maru and Fontaine Maru – in the sea to collect data for scientists. Among all the fuel-less self-guided wave glider robots, Papa Mau has completed a journey of 9,000 mile from San Francisco to Australia. You might be thinking, “Without fuel? How?” Well, Papa Mau converted the ocean’s wave energy into forward motion for its underwater fins and used solar panels on its surfboard-like body to power its diagnostic instruments from sunlight.

During this long journey, Papa Mau collected data on temperature, salinity and ecosystem and faced high and dangerous tides and storms. If this glider were a human or a living animal, no doubt it would have become a banquet of shark till now. But anyhow, it survived and finally reached Hervey Bay near Bundaberg, Queensland, Australia.

Other three wave glide robots are still in the sea. Among these wave gliders robots, Benjamin is heading for Australia while the other two (Piccard Maru and Fontaine Maru) are on their way to Japan and all will reach shore next year. This amazing project is sponsored by Google Earth and Virgin Oceanic.

Source: Liquid Robotics
Thanks To: Forbes

Study Finds 9 Percent Americans Would Have Sex With A Robot