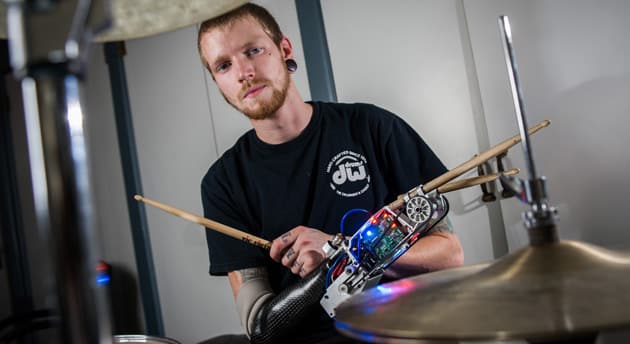 Losing an arm can be a very difficult situation for a person, more so for a passionate drummer. Jason Barnes lost his one arm two years ago, but with a new robotic arm, he can play drums even better now. Barnes lost the lower half of his right arm when it was electrocuted. He was a drummer back then and was really passionate about it. When he lost his right arm, he thought that this may just be the end of his drumming career. But then he decided to go against the odds and tried to devise a makeshift device which would allow his right arm to drum. Then later on, he was able to partner with Gil Weinberg, a professor at Georgia Institute of Technology. Their partnership yielded a new robotic arm specifically created to suit Barnes’ drumming needs.

It turned out to be pretty good. The device was created so that it was able to determine the electric signals from the upper half of Barnes’ right arm. This was done through a method called ‘electromyography‘. To use his robotic arm, all Barnes needs to do is flex the muscles of the upper right arm. This enables the upper arm to control a small motor which controls how the robotic arm handles the drumsticks. In all, the robotic arm allows Barnes not only to play drums perfectly well but also try two sticks with his right arm alone, allowing him to drum up significantly faster beats and tunes.

According to Weinberg, who helped Barnes get a hand of the prosthetic device, “It’s interesting to see him playing and improvising with part of his arm that he doesn’t totally control.” It is interesting indeed because it is yet another glimpse at what the future of prosthetic limbs may look like.