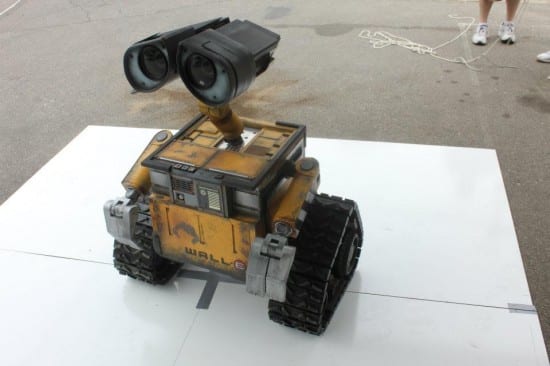 Remember WALL-E? The brilliant, intelligent and emotional robot in the Pixar movie, who melt the hearts of many? The movie was too good to be real, showing a cute robot accomplishing a plethora of things and having human-like ‘feelings.’ Now, a robotic enthusiast has turned the fantasy into reality. He has made a life-size WALL-E after working on it for 2 years. Mike Senna is not new to building robots. He has a passion for them, and had been working on a R2-D2 (a robotic character from Star Wars movie series) since 2003. When he completed R2-D2, it was quite a hit and he was invited to different events and occasions to show it off to the public. Eventually, Senna donated it to a cancer charity to help raise funds with it.

However, soon Senna wanted a new challenge, a better robot which would have even better appeal. ‘WALL-E’ fell into that description perfectly. Millions had loved the fictional robot even since he was featured in the Pixar movie. So Senna stared working on it. There were no schematics or any other kind of help available to him. He watched the movie over and over and tried to imitate the actions of the robot in the movie as closely as possible.

While having a job at the same time, Senna had to dedicate 25 hours a week to work on this project. In total, he spent some 3200 to 3800 hours and was finally able to make a working, life-size model of WALL-E. Naturally, this is an immense accomplishment and the video below shows the effort that went into it.