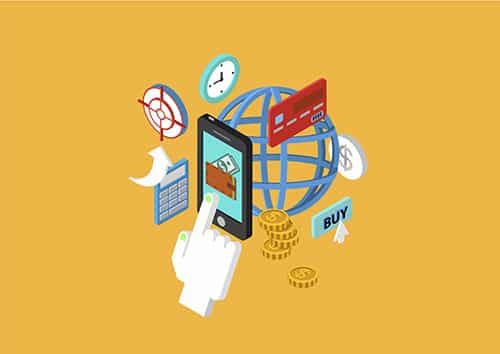 There’s hardly a reason to keep around a bulky wallet or clutch when e-wallet functionality and security is more reliable now than ever before. The infrastructure that vendors require to utilize e-wallet apps are finally catching up with users, and they are being accepted in more and more places. But which e-wallets are the most user-friendly and viable for everyday use? Unlike other e-wallet apps that use near field communication (NFC) technology, LoopWallet takes a different approach. The issue with NFC tech is that merchants must purchase a piece of hardware that interacts with your smartphone during the point of sale (POS). LoopWallet has put the onus not on the merchant, but on the customer. While LoopWallet works with 90 percent of all existing credit card machines, it does require the customer to buy an electronic device that fits on the back of a smartphone case. This device interacts with traditional credit card stations.

The LifeLock Wallet App is a general newcomer to the e-wallet arena. This wallet app can scan debit, credit, rewards, and even membership cards. Not only can you pay for everything with the swipe of your phone, but you can also check your balances and spending.

The LifeLock Wallet App also gives users access to a paid security service. Once you’re a member, LifeLock will monitor your accounts to make sure your hard earned cash remains yours.

Google Wallet is one of the most recognized products when it comes to e-wallets. This option allows users to add debit and credit card information to the app, so all you need is to carry your smartphone around. When shopping with retailers who have the hardware, simply swipe your phone over the dock to pay. The drawback, however, is that it utilizes your phone’s NFC technology, and not all retailers support this.

Because of this, Google has released the Google Wallet Card which can be used wherever MasterCard is accepted. It is basically a debit card, but it detracts funds from your Google Wallet instead of your bank account. Until more retailers install NFC hardware, this is a viable alternative.

PayPal Wallet may be the most all-inclusive wallet app to date. It can store all your payment cards and request or transfer money to others. However, this app is different from the competitors. When you go to a store, you must sign in to the store’s hub with your phone. Then, after you order, just toggle a payment on the app. While this is a cool feature, like NFC e-wallets, the merchant must purchase hardware in order to accommodate users who wish to pay this way.

Apple Pay stores all your payment options in one place. With the release of the iPhone 6, Apple Pay has received a lot of attention and support. Although not all merchants have the hardware to support this app, Apple has gotten many banks and stores on board. Apply Pay also makes it easier to shop online with one-click purchases that won’t bog you down while trying to get out the door. Apple Pay, like Google Wallet, and PayPal are growing in functionality, but it is a process.

How To Hide Your Secret Apps (Like Tinder) On Android Device

Shadowmatic: An Awesome Puzzle Game For Android And iOS