Batarang Controller for PLAYSTATION 3 and Xbox 360 to Debut at E3 EXPO and boast a cheesy bat-aesthetic (such as bat-start and select / back buttons), dual rumble motors, comfort-soft grips, and seven switchable splashes of LED color. Although physically the two controllers are pretty similar, Ol’ Bats seems to favor the PlayStation 3, giving its controller not only the popular Xbox 360 button / analog layout………. 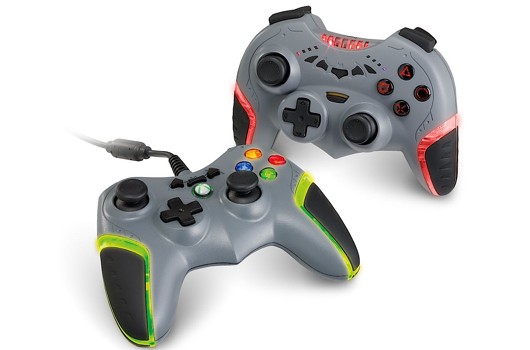 POWER A announced it will debut official Batarang-Controller zum Batman Arkham City Bei der E3 Expo June 7-9 in Los Angeles. Developed by Rocksteady Studios and based on DC Comics’ core Batman property, Batman: Arkham City is published worldwide by Warner Bros. Interactive Entertainment. Batman fans will revel in the authenticity of the design of the Batarang, while gamers will appreciate the comfort and performance that POWER A brings to these one-of-a-kind controllers. The Batarang controller for PLAYSTATION 3 is wireless with reverse analog sticks and a Batman-themed USB RF receiver. The Batarang controller zum Xbox 360 is a wired controller with a 10-foot / 3m inline release cable. “POWER A understands the high quality standard that partnering with a legendary brand such as Batman demands,” said John Moore, vice president of product development and marketing for POWER A. “We are committed to making the best possible controller to amplify the experience players have with Batman: Arkham City, and the Batarang does just that. It’s not just a great Batman collectible, but a high-performance controller worthy of the Batman: Arkham City game.” Das Batman: Arkham City Batarang Controller will be available at key retailers in conjunction with the game’s October 18, 2011 North American release date.