Caprica is a popular television series set in the fictional Battlestar Galactica universe. Beginning 58 years before the events seen in Battlestar Galactica, Caprica tells the story of how Colonial humanity first created the Roboter cylons, who would later plot to destroy human civilization in retaliation for their enslavement.

Friday night’s episode of Caprica, “There Is Another Sky,” moved the already-intriguing show to the status of must-watch. It was simply one of the best SF representations of futuristic videogames and internet culture that I’ve ever seen. 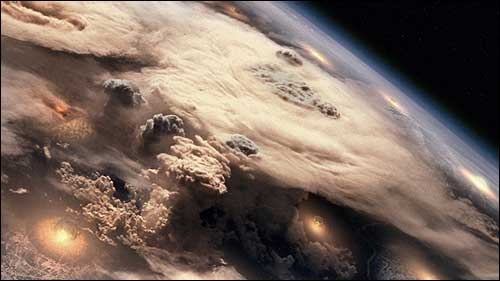 Caprica was occasionally shaky in its first few weeks, but with this episode the series found its sea legs. We’re learning more about the V-World that mega-entrepreneur Daniel Graystone created with his holoband technology. And in the process we find out what artificial sentience really means, and how Daniel intends to exploit it.

For the past several episodes we’ve focused on the fate of Daniel’s daughter Zoe, killed in a terrorist attack on a train. Before she died, however, Zoe left a virtual, sentient version of herself in V-World – an avatar that Daniel locates and coercively downloads onto a chip which he sticks into one of his military cylon prototypes. Though Daniel thinks this destroyed the Zoe avatar, in fact she’s still inside the cylon, biding her time until she can escape. During the brief moment when Daniel thought the Zoe avatar still existed, he created a similar avatar of Joseph Adama’s daughter Tamara. While Zoe has escaped to the real world in her cyborg body, Tamara remains trapped inside V-World – her father thinks her avatar got erased somehow, and Zoe doesn’t actually realize Tamara is a real person. She’s completely alone in a universe that’s a cross between Grand Theft Auto and the Sin City movie. 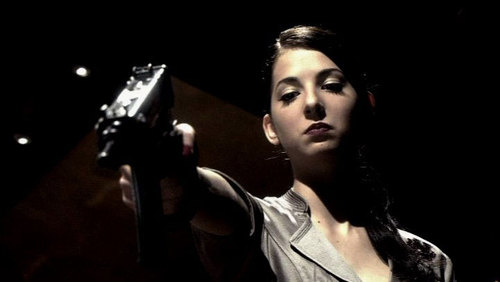 What’s worse than being a teenage girl trapped in the body of a massive robot? Being a teenage girl trapped in the collective fantasy of a million other teenagers. And that’s exactly what’s happening to Tamara, as she tries to find her way home. After what is apparently weeks of wandering through dance clubs and orgy rooms, she falls in with a group of game hackers and modders who promise to get her out of V-World. If she promises to do them one little favor. You see, Tamara has a superpower in V-World: Unlike every other gamer, who accesses the place via holoband, she can’t be killed when you shoot her. She just heals up and stays in the game. She’s basically the perfect mod for cheating, and that’s exactly what the gang – led by a very Mondo 2000-looking lady named Vesta – wants her to do.

So Tamara goes with one of the hot game modders into “New Cap City,” a game that’s a perfect replica of Caprica City, except lawless. Nobody knows how to win the game, and nobody can go back once they’ve been “derezzed” with a gun. But the hot game modder thinks the point of the game is to earn money, so he’s going to use Tamara’s powers to steal the avatar of the game’s richest player and convert that money to points (interestingly, there’s no hint that this money can be exchanged for real-world money like Lindenbucks or WOW gold – which you’d think would be the case). While Tamara gets into a shootup with the rich guy, gamer boy “steals” the code for his avatar and manages to break into the rich guy’s bank and suck up gold coins. In the ensuing shootout with guards, Tamara becomes the One, like Neo in the Matrix. She discovers she can alter the code of V-World simply by willing it. Of course, she still trapped in V-World forever.

Are Tamara’s powers now more awesome than Zoe’s? The answer to that question is what makes this episode pure genius. 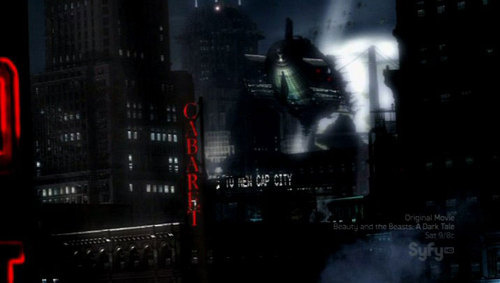 Daniel is about to be ousted from his company after announcing that they will be making holoband code free, no longer requiring people to pay a licensing fee for it. But he convinces the board to keep him by giving this speech, which is almost ripped from today’s headlines about the music and movie industry’s efforts to stay profitable in a world where everybody expects media to be free online.

If you think about it, the message here is both weird and chilling. If we can’t sell media online, we’ll just sell slaves instead. That’s right, kids. All that pirating you’re doing of media? It’s forcing media companies to change their business models from selling content to selling sentient beings. Why doesn’t the RIAA consider that?

In all seriousness, though, the more I think about this scene, the more loaded it is. That moment where Zoe rips her own arm off to please Daddy is horrifying and powerful. Though Daniel doesn’t realize it, he’s suggesting that his company sell his daughter in order to make up for the profits it has lost by giving away V-World access for free.

Plus we’ve got this scenario where Tamara controls the world of what you might call “old media,” while Zoe controls the new. She’s inside the body of a creature who could bring the V-World into the real world. Why put on your holoband and visit a virtual wargame when you could just go to a warehouse full of humanoid cylons and act out your bloodthirsty urges on real creatures who can never disobey? And that’s the future of Graystone Industries – the business that comes after the business of holoband entertainment that they’ve been in for over a decade. 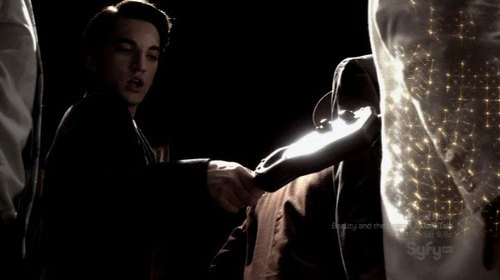 While the V-World and cylon marketplace plotlines heated up, we also got our first real look at how much the Adama family has changed in the aftermath of the maglev bombing. Joseph has finally returned to his Tauron ways, going through a traditional funeral ceremony and tattooing for his wife and daughter. And little Willie has become disobedient and violent, preferring his uncle Sam’s gangster den to school. He even beats up a kid who calls him a Tauron dirt-eater.

Then, just as it seems that Joseph and Willie have declared peace at the funeral, their world is disrupted by the Graystones once again. Tamara has sent her hot game modder boy to go out into the real world and find her father so she can get help. Gameboy arrives at the funeral, thinking all he has to do is ask Joseph to wake his daughter up. Instead, he finds out that Tamara is dead. And Joseph now knows his daughter is actually alive, albeit in an extremely altered, gun-toting form. She’s becoming the mightiest gangster in V-World.

The Adamas and the Graystones are now tied together in all kinds of disturbing ways. Both families have given birth to radically new forms of life: A sentient robot, and a sentient avatar. And both are also tied together by crime. By that I mean the crime committed by Sam to get Zoe’s chip, but also the crime of experimenting on humans without consent. Zoe and Tamara have both been made engineering experiments against their wills. And that is a crime that the Graystones and Adamas will be paying for throughout this series.

From its humble origins as a spinoff of Battlestar Galactica, Caprica has grown into a terrific show in its own right. A show that nimbly asks big questions about the nature of sentience and justice, while also spinning a terrific yarn about old-fashioned gangsters in a world of high-tech corporate warfare.

This is definitely not Battlestar Galactica anymore. It’s something else. And you’ll be sorry if you don’t tune in to find out more.