At times, when you run out of battery at a critical juncture, say during a very important call, you simply wish for a few more minutes of talk time to conclude the conversation. In other words, you want a brief power boast rather than a full recharge. A new battery design called ‘Chewing Gum Battery Concept’ envisions a solution to this. 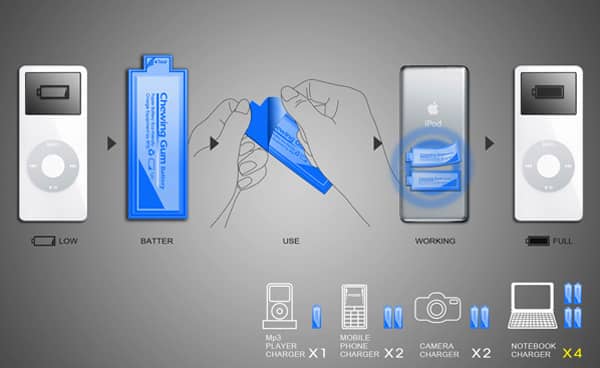 Don’t be put off by the name because the battery doesn’t really work on chewing gums. Rather, it is paper-thin, quite like a stick gum. All you have to do is stick these batteries to the back of your device’s battery and they will boost the existing up for some time.

Recharge Your Cellphone In Just 20 Seconds!

The idea here is that of a truly disposable battery. The packs of batteries, like chewing gums, will be available commonly at solar-powered dispensing stations. So you can carry a pack or two in your pocket or in the car and stick them to your device whenever it is running low on power.

What remains to be seen is that whether or not producing such thin batteries is even possible. We have seen some really sleek battery prototypes this year but trimming the size to a paper-thin thickness is going to take a while.

Bolivia Gears Up To Tap Into Its Huge Lithium Reserves, Could Be The ‘Saudi…