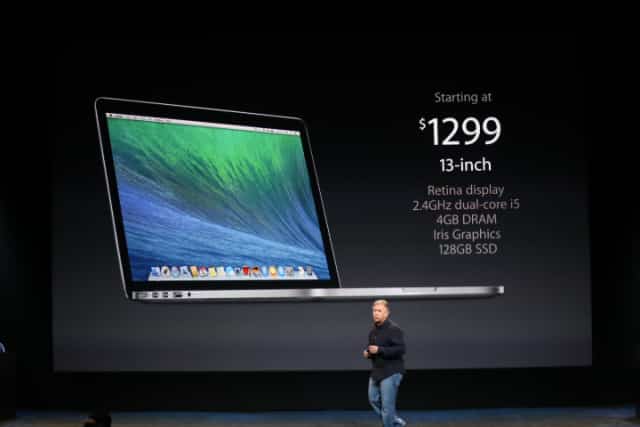 Apple has finally lifted the wraps off its new offerings. The event continues as of this moment, although Apple has already announced much of the expected stuff already. Among the announcements are new 13-inch and 15-inch MacBook Pros with bumped up specs. Apple has packed the 13-incher with a Retina display, together with a 2.4GHz dual-core i5 chip and 4GB of DRAM. The machine weighs 3.46lbs and is a mere 0.71″ thick. It comes equipped with integrated Intel Iris graphics and offers up to 9 hours of battery life. The $1299 price tag is for the model packing 128GB of SSD storage space, which is certainly a far more lucrative price than Apple has offered in the past.

New 15″ MacBook Pro:
Like 13″ MacBook Pro, the new model of the 15-inch MacBook Pro comes with a Retina display. This machine is powered up by a 2GHz quad-core i7 Intel Crystalwell chip and a whopping 8GB of DRAM. The graphics are taken care of by an Nvidia GeForce GT 750M chip together with Intel Iris Pro Graphics. Apple has offered a significant drop on the price of the 15-incher too. Last year’s 15″ MacBook Pro started at $2199 whereas this year, the new model packing 256GB SSD storage space comes at a mere $1999.

The significantly lower prices of the two machines are sure to drive their sales significantly this year. Coupled with Apple’s free offering of the new OS X release, it would appear that the company has decided to be less profit-oriented this year.