Raspberry Pi, the credit card-sized mini-computer, has been a huge success with developers as well as common users alike. Priced at a mere $35, Raspberry Pi has apparently been selling like hot cakes. And now, the team behind the mini-computer has hinted that the total sales figure has mounted up to one million! 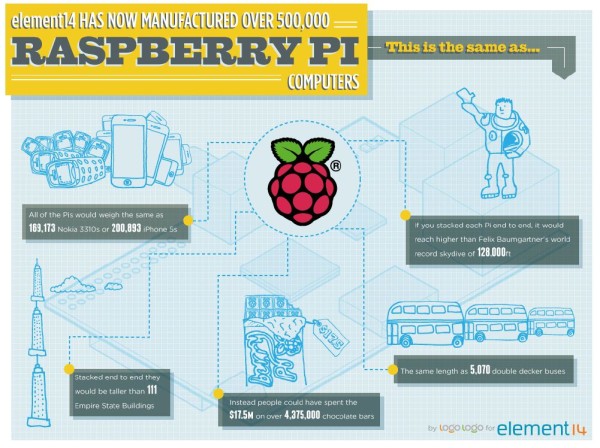 Since the inception of Raspberry Pi, the tech world has taken a keen interest in the mini-computer. And for obvious reasons. It carries a price which is extremely affordable, it provides virtually all vital functions of a computer, it can easily be hacked and programmed to do a developer’s own chores;finally, it can access a number of Raspberry Pi apps at the ‘Pi Store.’ All this in $35 is not a bad deal at all.

The mini-computer has been flying right off the shelves ever since it became available. Although the initial launch had to undergo a few hiccups, things had been smooth since. Once the mini-computer was launched, all the available stock was gone in no time, thanks to the huge demand. And the same has been happening to subsequent stocks since.

Now the numbers from Raspberry Pi sales since February 2012 are in. The mini-computer has been sold by two official distributors – one of them is element 14/Premier Farnell and the second being RS Components. Whereas RS Components hasn’t yet divulged the numbers, Farnell has announced that it just broke through the half a million milestone.

Taking a calm estimate of the units sold by RS Components together with the numbers from Farnell, the Raspberry Pi team believes that the total count has reached, more or less, one million! It is indeed huge news since initially, no one anticipated such wild popularity for the tiny computer.

CuBox-i Series Four mini Computers Are Up For Pre-Order

Utilite — A New Card-Sized Computer Which Costs Only $99

ASUS Transformer AiO Will Be Available In Q2 For $1,299