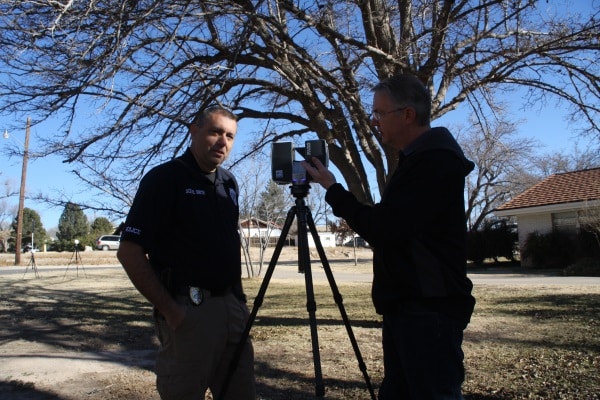 Crime scenes hold a certain significance for the law enforcement, and a certain fascination for the many of the rest. To make crime scenarios as accurate as possible, a police station in New Mexico has decided to use 3D-printed crime scenes. When it comes to crime scenes, the actual spot does carry critical importance in terms of forensic evidence. However, the overall location, size, look and feel of the scenario also contributes significantly to the understanding of a crime. Currently, law enforcement agencies usually rely on using cameras to shoot a video of the crime scene, which is then used in investigations, courts or any other relevant occasions.

But with 3D printers, shooting camera videos sounds obsolete. When you can create an exact 3D replica of a crime scene, why go with a 2D video? This is probably what has driven the Roswell police station to purchase a Faro 3D scanner. The scanner will rely on touchpoints placed around a crime scene.

The scanner itself will send out laser signals and using the information from the touchpoints, it will create an accurate digital rendering of the crime scene in 3D. Of course this is just a start and for now, the said police station will be using a digital 3D copy of the crime scene to understand a crime better.

The 3D digital rendering can then be used to present to the jury during the course of a trial, or to the investigators trying to solve a crime. The Roswell Police Department claims that the 3D scanner, which cost a cool $86,000, will be able to create a 3D rendering within a few millimeters of the real deal. In other words, it is as real a copy of the actual scene, as can possibly be at this point.

While that’s the limit of the practical use of 3D technology in criminal forensics, it is quite possible for police departments in the future to use actually 3D printed models of crime scenes to get more close to it.