Microwave units are fairly boring most of the times. Nearly all of them have to be dealt with manually, with the user required to set time and do other chores. Developer Nathan Broadbent has now hacked away his microwave, fitted it with a Raspberry Pi and added a bulk of really cool functionality to it. 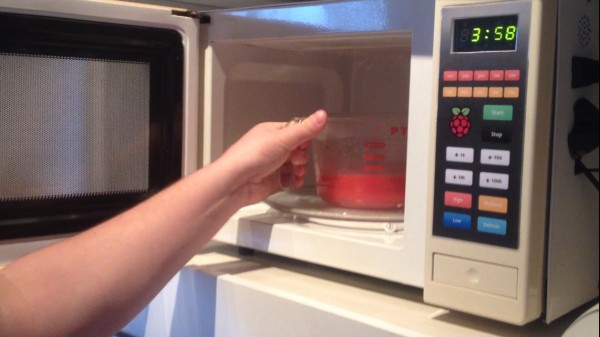 Broadbent was apparently as bored of his microwave as we all are and he decided to do something about it. Among the new features that he has been able to add to the microwave unit are voice-commands, a self-setting clock and a lot more.

How To Save Wi-Fi Connectivity From Interference By…

The self-setting clock is directly connected with the internet and is able to set itself by accessing the right time online. Another really interesting feature is the barcode scanner. Broadbent is creating an online database of cooking instructions so that one can select any of the barcode choices, comprising of definite set of instructions. This can be immensely helpful for those who regularly indulge in cooking with the help of the microwave.

Using voice commands is nothing new but using it in conjuction with a microwave is certainly really cool. With the tweaks in place, Broadbent can now tell his microwave to cook for ‘Twenty seconds, low’ which is a lot better than having to fiddle with the manual controls.

Moreover, he can even control the microwave over the phone which has little application but goes on to show what really cool things can be done to a microwave. Finally, as soon as the microwave is done cooking, it tweets. Let’s hope that the manufacturers get wind of these tweaks and fit their upcoming microwave models with better features.