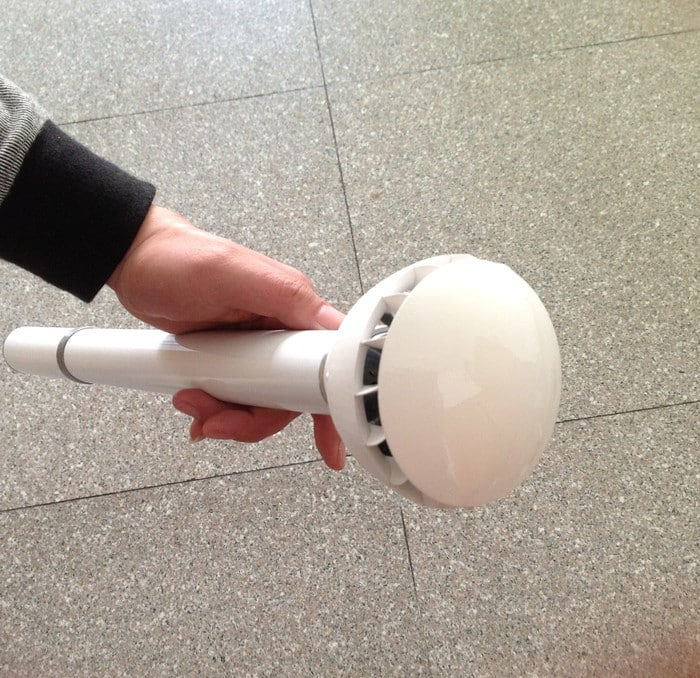 Umbrella protects us from being drenched during rain. But almost all the umbrellas we see are traditional and ordinary as they based on same theory/concept. But now, a new umbrella called Air Umbrella is being made which can protect you from rain not by opening it like other umbrellas, but just by creating a force-field of air. Over the past two years, a team of designers in China has been working with postgraduate students at the Nanjing University of Aeronautics and Astronautics to invent this Air Umbrella. This umbrella works without those spiky, flimsy metal poles.

It doesn’t even need a canopy. Rather, it keeps you dry by creating a ‘force field‘ of air that circulates around you. This nifty little hand-held device contains a lithium battery, a motor, and a fan, and together they work to create a continuous cycle of air that flows out from the tip. This air flow is strong enough to constantly deflect rain particles away from the user, and the team says that two people can fit under it comfortably. They are working on extending the battery life of all models.

But as of writing, the team has collected $26,637 from 235 backers, keeping 9 days in hand. Here’s a video of Air Umbrella. The Air Umbrella team has announced that they plan to start delivering the Air Umbrella products to Kickstarter backers from December 2015. Fore more details, hit the link below.

The Ideal Extension To Your VR Headset