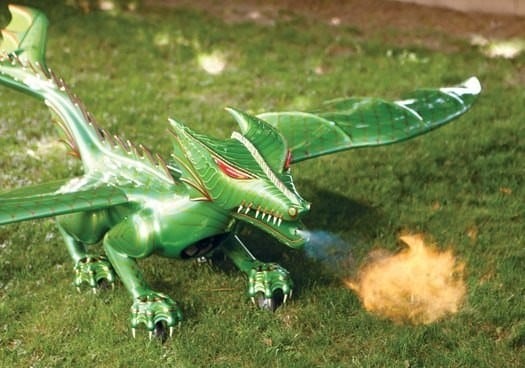 According to mythology, when dragons were alive, some of them were able to emerge fires from their mouth. If that is true, then we are really unlucky that we couldn’t see that by ourselves. And it seems like, such unluckiness has inspired Rick Hamel to create a remote-controlled flying machine, to be more specific – a dragon, that can emanate fire from its mouth. A couple of years ago, Rick Hamel created this RC dragon that actually emits fire from its mouth at a speed of up to 70 mph (112.6 km/h). The flying dragon has a wing span of 9 feet (2.7 m). It features a miniature turbine engine in the chest that thrusts out the rear of the mythical beast at 500 mph (804.7 km/h).

The dragon is powered by jet aircraft fuel or kerosene. With its half-gallon tank filled with jet aircraft fuel or kerosene, the dragon can hover around 10 minutes at a stretch. It is made of two layers of epoxy glass and high-grade plywood. Other cool features of this dragon include eyes that light up red, striking fear in the hearts of one’s enemies, and a head that rotates into the direction of turns, making the dragon look a little more authentic while in the air. It is to be noted here that the dragon can fire only when it is on the ground, not when it is flying. Here’s a video for you.

Users will be able to control this RC dragon with a 2.4 GHz remote control. Hammacher Schlemmer is selling the RC dragon for US$60,000. But you can’t directly order it online or from any store. Rather, if you are interested in buying the dragon, then you have to call in first to talk to a product specialist and place your order.

Source: Hammacher Schlemmer
Thanks To: Gizmodo