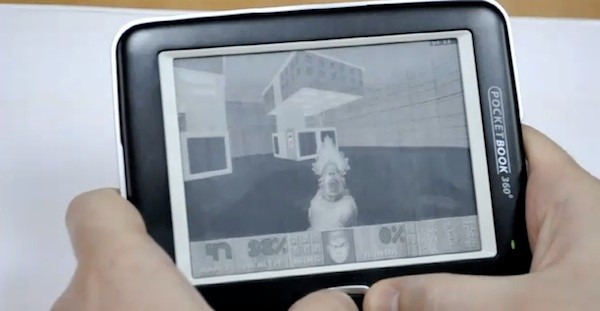 The developers over at PocketBook ported a version of the video game Doom 2 to run on an updated version of the PocketBook 360, called the PocketBook 360 Plus.Information about the PocketBook 360 Plus is scarce at this point, but the video below shows some of its potential. It is presumably equipped with an E Ink Pearl screen and a new Freescale processor to achieve frame rates for video games.E-readers have a few advantages by using an E-Ink display rather than an LCD solution. They use a lot less power, can be seen in most lighting conditions including direct sunlight, and present text on a screen that looks almost like paper therefore cutting down on eye fatigue.It’s unfortunate then that they can’t do color yet (or ta least not well enough for a company like Amazon to consider it for Kindle) and have very poor refresh rates. If those two issues were solved we could see a move to E-Ink for tablets like the iPad and Galaxy Tab happening.

E-Ink displays are clearly getting better in terms of their screen refresh rates at least. An employee at PocketBook has posted a video on YouTube demonstrating this fact by showing the PocketBook 360 Plus e-reader running id Software’s Doom 2. That device uses a 5-inch E-Ink display, yet has a screen refresh good enough to show fluid movement around a Doom 2 level.It’s by no means perfect, but is just about good enough to be playable. And while we definitely wouldn’t state this is a gaming platform just yet, it does bode well for the future if E-Ink displays continue to improve. And even with this e-reader you could ship a number of less animation-dependant games that would work well.The video description states this is a PocketBook 360 Plus. The PocketBook website only lists a PocketBook 360 so this must be a new model yet to be announced. We suspect the specs will be pretty similar though, with the 360 sporting a 5-inchVizplex 200dpi E-Ink display with a resolution of 800 x 600. It has 64MB RAM, 512MB flash storage, and a 1000mAh battery which is sure to disappear quickly when playing the game due to the rate of refreshing.

This is similar to the video that Bookeen posted a couple months back where they managed to get video to play smoothly on a Pearl screen.Running shooter video games like Doom 2 on an E Ink ereader isn’t something that is going to be practical, but it is good to see E Ink advancing in potential for future applications. Something like this could be applied to E Ink’s new Triton color display technology with greater benefits down the road.

Superheroes Will Clash In “Injustice: Gods Among Us”