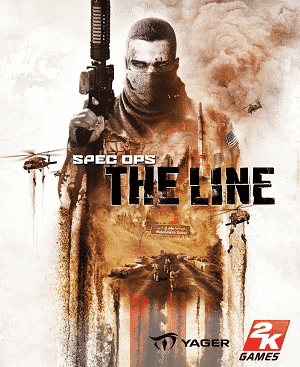 GAME REVIEW- Spec Ops: the Line is the newest release of Spec Ops series. The game has been released this June and already got the eyes of third person shooting game fans. The covert style third person gameplay, amazing squad tactics, brilliant graphics and work of lighting are the highlights of the game. You will surely be lost in the desert of Dubai in “Spec Ops: The Line”, like I did.

The game story starts with Martin Walker, Adams and Lugo. The trio starts their mission to rescue John Konrad and his damned 33rd Battalion in Dubai, just after 6 months of the sand storm that destroyed the city completely. Receiving the radio message for help and rescue of the war hero John Konrad, the 3 men squad sets out on its quest through the deserts and ruins of Dubai to find out the truth.

There are different ways of endings based on player’s decision in this game.

• Walker can commit suicide by allowing the projection of Konrad to shoot him which turns into reality. And Walker finally shoots himself.
• Walker can put a stop on Konrad by shooting his projection and then make for the escape call from Konrad’s radio.
• Walker can still make decision not to fight with Konrad because of knowing that Konrad is now just an illusion and can return to his country with his evacuation team

Major Characters of the Game

• The graphic quality of this game is very high.
• The game environment is very realistic.
• The squad tactical gameplay allow players to give orders to execute someone, to hold position, secure area, and make decisions how to proceed further during a mission.
• A wide range of weapons such as AK 47, Grenade Launcher, RPG, MH41K etc can be used in the game.
• Ammos are scattered in all places of Dubai. So, there are lots of pick–ups.
• The story line is very thrilling. The truth of the 33rd Battalion will reveal gradually through the missions. And players will know the reality of John Konrad at the end part of the game.
• The covert tactics of the game allow players to travel from cover to cover to avoid damage.
• Players can subdue enemies with melee attack during a fight, if needed.

The storyline seems to be fresh in Spec Ops: The Line compared to its previous releases. Although introduction of supernatural elements and events make the story a little bit hard to digest by players. The location setting of the game may have been more dynamic if it could be decentralized from the ruins of only a single city –Dubai.

During playing the game, I find that incorporation of some element could have been making the gameplay better and more dynamic.

• The game lacks the ability to switch between characters of the squad and each character lacks difference in style and ability.

• Different style of melee attacks could have been included to make the game more fluid. Although players are able to give squad orders but the gameplay does not give the authority to specify the member of the squad to execute the order, to decide the direction to attack .For example, Walker can give his squad order to eliminate the turret gunner, but is not able to specify who should carry out the order or also not able to give instruction to proceed from behind or rear side of the gunner.

• In the game the squad should have been able to set up temporary mission-control centers through which they can communicate with home country, make planning for next mission, regain health and refill ammo.

• There should have been one or two more characters in the squad such as medic, scout, radioman, engineer etc.

I have found the graphics quality is as high as it was claimed by the developer. Especially, the characters of the game look realistic. Even the environmental changes such as sand storm look real. There are some great works on lighting in the game. The game also has great background music. The sound variation of shooting from different guns, sound of grenade blast, voices of characters are very clear and smooth. Yager Development and Darkside Game Studio should be thanked for such detailed level of work on graphics and lighting in the game.

The game has fantastic multi-player mode with six conservative game types along with seven maps and load outs. The game also has online leader board challenges.

You can order the game from Amazon.

About 10 Million Sales Of COD-World At War Map Pack

Windows Marketplace And Xbox.com Becoming Big One For Gaming