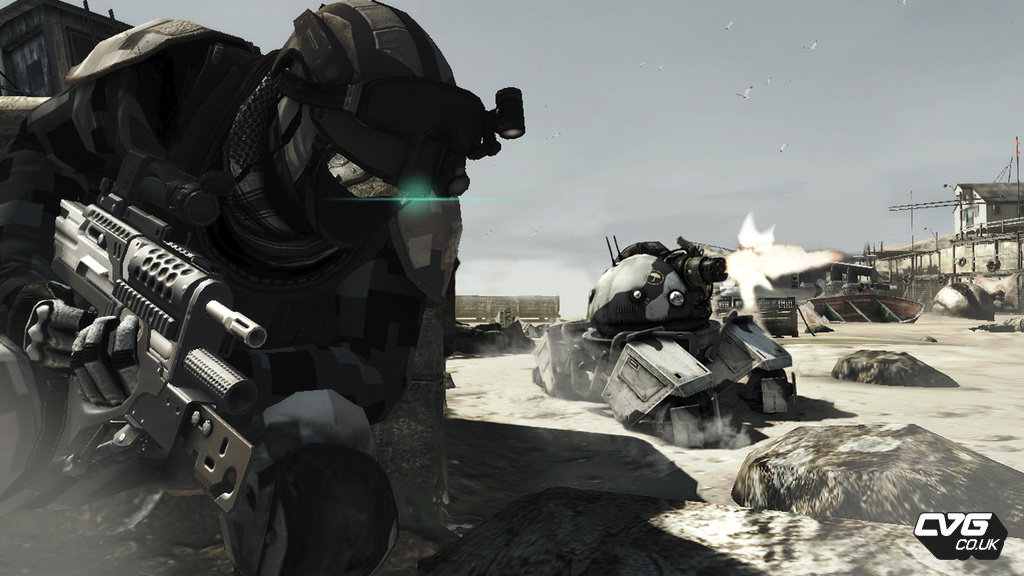 Ghost Recon Future Soldier has some similar features to the Ghost Recon Advanced Warfighter (GRAW) franchise that preceded it, but this is definitely not just a sequel with a slightly different name. With a host of new items at the Ghost’s disposal, as well as a new emphasis on four-player coop — rather than the squad commands from GRAW — the hope is that this will be the game that brings the franchise to the next level. Our initial peek at Future Soldier in Ubi’s Parisian studios earlier this year baffled. Put simply, it didn’t really look or play like GRAW. Why mix up a winning formula? Producer Adrian Lacey was commendably honest – basically, in its years out of the game, Ghost Recon had ceded its tactical shooter crown to the Modern Warfare twosome. Journeying to the chilly-looking ‘Northern European Coast'(we’re guessing: Norway) for their E3 demo, Lacey and Designer Rafael Morado lay down the hard sell.

The E3 mission opens with light delicately playing over a Ghost’s Thermoptic Camouflage armour, with them silently executing some tragic Ultranationalist with a single shot to the back of the head. As confirmed in our feature, firing your weapon will temporarily disable your cloaking, so you can’t simply swan through missions like the Predator.

Re-activating their camo, the squad advance up the beach – hunkering behind barnacle-encrusted fishing boats that show off the ultra-refined 60 frames-per-second engine.

THERMAL PUNDIES
Time for some high-tech magic. Team leader Kozak (complete with Michael Ironside/Powers Boothe-besting gravelvoice) patches in an Orbital Scan, giving the Ghosts “added situational awareness on the battlefield”, which basically translates to flagging up all enemies in range and handily plonking their locations on your radar.

As point man, Kozak is charged with clearing a path up onto the landing dock, a task Lacey assumes with relish. Getting up close and personal is the name of a Future Soldier’s game, with close quarters combat apparently the future of the modern battlefield. Lacey delights in tiptoeing around, toying with his prey – confident that the poor sap is utterly unaware of his presence. Then, he fluidly executes the unlucky chain gun operator before clasping his prone body in place and ducking out of view. Result? A fellow guard strolls right by, oblivious. All that in real time, too. This is very much a stealthy incursion, so mass murder is not on the menu. Skipping past a phalanx of guards, Kozak and squad breach the docks – and identify POI (person of interest) Kerenski lurking only 50 feet away. It all goes a bit synchronised takedown at this point, as you mark your squads’ allotted targets and mooch into a position to grab Kerenski and subdue him without resorting to a firefight.

We’re not exactly sure how this all ties into our previous Lacey reveal concerning the capture/executing of prisoners on the battlefield – but we’re guessing Kerenski is important to the plot so this last bit is probably just cut-scene. Lacey describes the incident as “classic Recon”, perhaps harking back to the old days on Xbox rather than the sandy Xbox 360 variants.

DOCK OF THE SLAY
Skipping ahead to the apparent climax of the beach assault, Kozak and crew are holed up in the nearby North Beach Hotel – “a different viewpoint of the battlefield, more vertical,” reckons Lacey. In other words, you’re on the second floor – still undetected at this point – gazing down at the unfolding beachy drama. Switching to a first-person recon mode, the Ghosts note two choppers delivering an enemy ground drone near the shoreline.

This heavily armed, heavily armoured metal gimp obviously presents a significant problem in terms of an exit strategy, so the decision is taken to muller the entire Ultranationalist force. Kozak zooms in and targets one of the heli pilots, shooting his face clean off – resulting in the chopper careening out of control, taking the drone with it before it can be laid down. Shame, that. At this point, things kick off big time, with glass shattering, masonry crumbling and camera tilting. Very cool, granted, but also massively on-rails.

For the demo/mission’s climax, Kozak and the Ghosts have somehow made it down to the beach again – right next to their initial point of entry – and are engaged in a fierce firefight with suitably enraged rebel troops. Stealth is out of the question so Lacey takes the opportunity to demonstrate Future Soldier’s dynamic(again, complete with patented Paul Greengrass tilt-o-cam) cover-to-cover mechanic, including the neat new long-range slides into safety. As the concrete-with-reinforced iron barriers the squad hunker behind are fairly torn to bits, Kozak gets busy with some down the barrel capping – enemies realistically reacting to being shot in the legs, arms and, possibly, goolies.

Suddenly a missile streaks out of nowhere and destroys a nearby attack chopper, before another combat drone (argh!) tears across the sands and commences reducing the Ghosts into mincemeat. With no apparent hope in hell of defeating it, the screen fades to black and the demo wraps up.

Applause bursts out, the audience apparently convinced that – after a frosty reception – Future Soldier is set to do the biz this autumn. For us, it was great to see some extended single-player footage – the meat of our Parisian excursion concerned itself with the innovative new multiplayer mechanics. We also can’t wait to take control of a drone of our own; they look considerably powered up since we first glimpsed them back in February. Exciting times for Recon then, with more intel very soon.