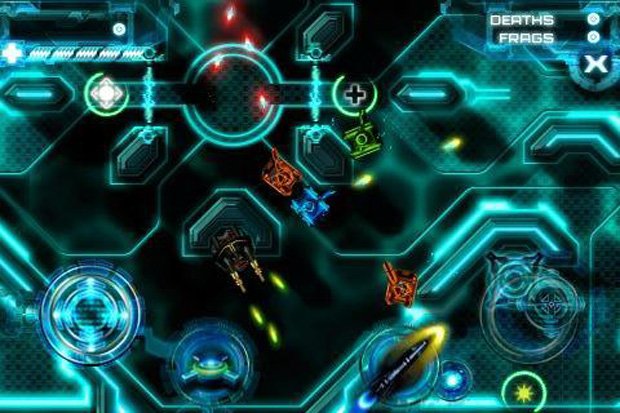 As a rule, we’re curious of free games. They’re like the generic brand knock-offs of the iPhone app store. We are even more suspicious of games that exist solely to promote some other product, such as a film or TV show or comic, oddly enough, potato chips. They’re like the infomercials of the iPhone app store. So it stands to reason that when we first heard about Tron. A free game custom-crafted to promote Disney’s upcoming film Tron: Legacy and the corresponding full-sized game, Tron: Evolution, we weren’t exactly melting our mouse button with all the high-speed clicking. The trailers for both Evolution and Legacy are actually viewable in-game, for crying out loud. However, Disney also tossed in a pretty decent little two-stick tank shooter, thereby blowing apart our theory that nothing free is worth having. And there may be more on the way… There are 15 single-player levels in Tanks Arcade, as the game is called, as well as a full multiplayer mode featuring two, four, and six-player matches. And it’s legitimately worth playing, with the same neon-drenched, semitransparent look of the film, solid enough controls, and a range of weapon upgrades and the like. Most intriguingly, Disney is apparently planning updates to the game, the first of which is supposedly scheduled to go live this very day. Will it be more levels? An entirely new game, perhaps? Who knows – you’ll have to log in to Tron to find out. Will it redefine your idea of iPhone gaming? No. But it might change your mind about free, sponsored iPhone games.

Mortal Kombat Will Be Arriving On The PlayStation Vita