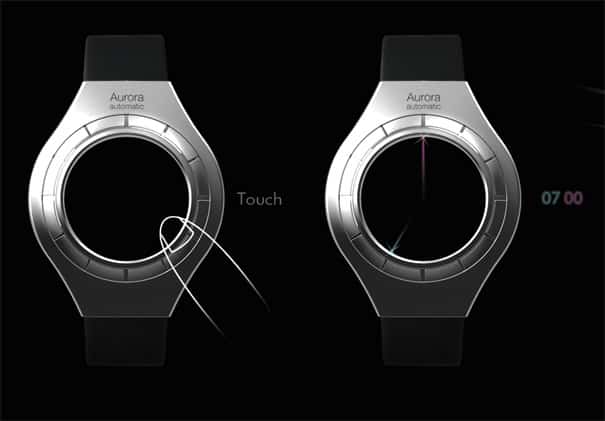 Aurora is a watch that doesn’t have an apparent dial. There’s more of a transparent face with no signs of the hour or minutes hand. It’s not as if the designer forgot to put them there, he just got innovative and decided to perk up this analog piece by including funky laser light beams for the hands. The red beam indicates the minutes and the blue depicts the hour. They appear only when you tap the bevel edge around the watch ring; until then it’s just a hip jewelry around your wrist. Designer Jihun Yeom has put laser lights in a watch, with red indicating minutes and blue indicating hours. The sad news is, it’s only a concept for now. Presumably they need to perfect a fail-safe to keep from singeing wrist-hairs. But there’s no question that Future Me will be sporting one of these at each and every light cycle derby.
Source:gizmodo.com

Samsung To Start Production Of Flexible AMOLED Display In November