As we know all Adobe has a huge demand for using in iPhone & iPod touch. This demand made history might be appropriate here.Adobe got 7 million iPhone and iPod touch download requests for Flash in December 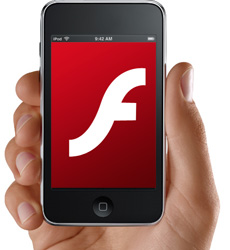 2009 march Adobe CEO Shantanu Narayen proudly proclaimed that his team was about to start coding a Flash player for the iPhone, only for his company to promptly backtrack on those words a day later.about this time last year, Apple and Adobe again announced that they were collectively working on putting the ubiquitous format on Cupertino’s mobile devices, but you won’t be surprised to hear that hasn’t born any fruit yet either. In fact, relations seem to have grown a lot frostier thanks to the iPad’s Flash-less introduction, and an escalating war of passive aggressive words culminated in Steve Jobs calling Adobe lazy. Lazy or otherwise, Adobe is keeping track of its download stats, and it’s taken the chance to boast that it received a cool 7 million download requests for Flash player from iPhone and iPod touch devices during December. We’re hardly shocked by this number, but it seems to illustrate well the fact that so long as the two heavyweights continue playing an increasingly complacent form of hardball with one another, the only winners will be their competition.