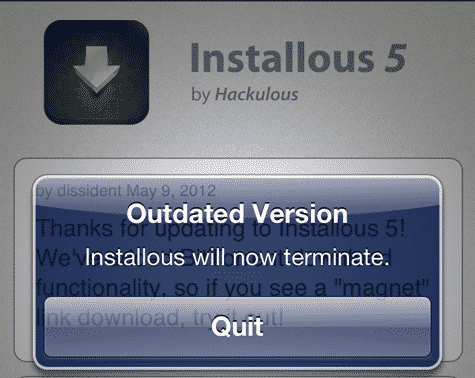 For long, Apple users with jailbroken iOS devices have used Installous to lay their hands on pirated versions of paid apps. Installous would let the users access thousands of such paid apps for free. However, the sad news are that the app is being shut down now.

Installous has been wildly popular with the iOS jailbreak community over the years. The app has been incredibly handy for the users in that it brought loads of paid content, straight to their devices for free.

What was even more impressive was the fact that at times, a top paid app was made available at Installous within a few hours of its being released. Installous essentially let you get into the wonder world of apps meant for the iPhone and iPad, then choose whatsoever apps you life, take them and walk out without ever paying a single penny.

It is in view of this that I am fairly surprised that Hackulous, the development team behind Installous, have decided to shut down their operations and the app as well.

In a final message posted to their website, Hackulous stated, “We are very sad to announce that Hackulous is shutting down. After many years, our community has become stagnant and our forums are a bit of a ghost town. It has become difficult to keep them online and well-moderated, despite the devotion of our staff. We’re incredibly thankful for the support we’ve had over the years and hope that new, greater communities blossom out of our absence.”