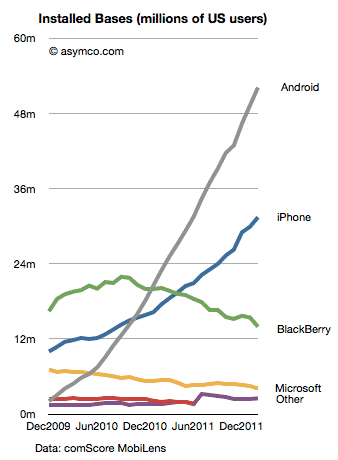 iPhone has been a roaring success in US where millions of users are tooling iPhone devices and millions more are added to this user base every year. Android is also doing a very competitive business. However, now in the light of a report regarding iPhone, it has been revealed that half of the new iPhone devices that are purchased annually are simply replacements for the older iPhone devices. This analysis, revealed by this report, has manifold implications. One deduction from this bit of information is that it shows very strong loyalty on the part of iPhone users. Half of iPhone users would rather prefer continuing using iPhone, albeit a newer model, rather than making a switch.

However, a rather adverse implication for Apple is that this also shows that the sales for newer iPhone models is triggered in huge part by already existing users. And that, the number of new users that are being added to the iPhone consumer base is not as staggering as we would have formerly believed.

Nonetheless, it all depends on the overall growth of market at the end of the day. For instance, if Apple’s user base is significantly expanding, which it is, this would show that while retaining a very strong user loyalty, Apple has been successful in attracting a lot of new users to the iPhone devices. But if it were the case that the overall number of iPhone users wasn’t significantly increasing, this would have indicated that the same users simply kept switching from one iPhone model to another, thus triggering sales of newer devices but keeping the overall market size to a constant.

Fortunately for Apple, the case is that whereas 50% of the iPhone purchases made are repeat purchases, another 50% are not. This is still a fairly strong percentage which indicates a very handsome growth for the iPhone-maker.

Draw & Design! 1.0 for iPhone and iPod touch Has Released