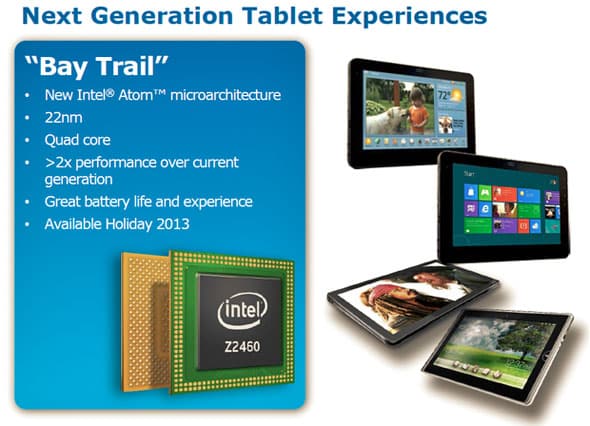 Intel has been pushing its back into the development of low-priced laptops, convertibles and tablets by leaning on the mobile Atom processors. The company’s CEO, Brian Krzanich has reiterated that Intel would continue its commitment to mobile products and that $300 laptops and $150 tablets are on their way. The high-end tablet market is currently saturated, with the likes of Apple, Samsung and Google splitting the market share between them. For Intel to gain a solid foothold in the arena, the company will have to rely on products which are not exactly high-end and are very affordable.

Therefore, it is not surprising that the company is focusing on the Atom processors meant for mobile products. Atom chips may not furnish as much computing prowess as, say, the top-end chips used in an iPad, but they can certainly furnish enough power to juice up a decent mobile machine.

According to Krzanich, “We’re putting much, much [more] effort on Atom.” He went on to elaborate on ‘Bay Trail’ which is a new, and far more improved, flavor of Atom, “Bay Trail allows us to get into these markets that we aren’t in…in a big way today. We expect to see touch-enabled clam shells [laptops] coming down to the $300 range, convertibles [tablet-laptop hybrid] to the sub-$400 range.”

He further affirmed that with the help of Bay Trail chips, the overall costs of tablets may come down to as low as $150, making them ultra-affordable for many new users. Such possibilities are certainly very enticing and we eagerly look forward to such sub-price mobile machines which come equipped with the new chip.