Acer is one of the first brands on the train from AMD Fusion with the Brazos platform and Acer Aspire One based on the D255 its new Aspire One 522 with 10,1- Customsdisplay and a resolution of 1,280 x 720 pixels.Acer Aspire One 522 also have DirectX 11 ready AMD Radeon HD graphics and UVD 3.0 video acceleration……. 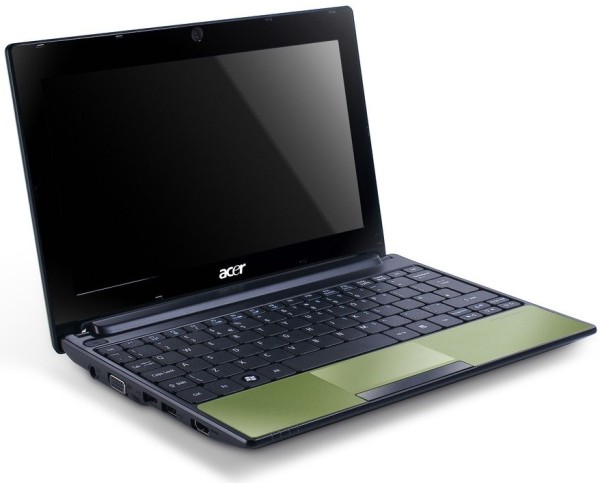 This 10-inch Aspire One 522, follows on from the AMD Nile based 521, also 10-inch in size and carries over the same chassis but in green, and no doubt there’ll be more colors. Chassis aside, this is a new beast; It’ll have the next generation AMD Fusion platform, in particular, an AMD C-50 ‘Ontario’ APU, which is a 1GHz dual core processor, with a total TDP of 9W. For graphics, it has a Radeon 6250 chip, with DirectX 11 support with UVD3 accelerated video decoding.That 10-inch display will have a higher resolution 1280 x 720 resolution. This isn’t the first time Acer has pumped out 10-inch netbooks with 1280 x 720 displays but it’s just that they haven’t been available in most countries. This could just as easily be released with a standard 1024 x 600 display. There’s also HDMI output to take advantage of all that media processing power.Battery life is rated at 6 hours with a 6-cell battery, so perhaps we shouldn’t expect too much improvement in battery life over the current generation AMD Nile platform.