GPD is a big name in the Windows-based computer business as well as the handheld computer business. If you remember, the company have previously launched handheld gaming PCs which were a massive success. Moreover, they also have the GPD Pocket-line of computers. But now they are launching a product that has a narrower market.

A handheld computer or a palmtop computer is a small device, smaller than traditional computers which serve a very special need. Previously, since the late ’90s, handheld PCs were present in the market. they were primarily used as PDAs. But now they are built so that they can serve more needs. For example, the GPD MicroPC is not only a PDA but it has high computation power which is primarily because of the Intel Celeron N4100 quad-core “Gemini Lake” processor, 4GB RAM and 128GB M.2 2242 SSD. This easy to use PC runs on Windows, that means you don’t need to learn anything new.

GPD MicroPC at a Glance

If you have used Microsoft Surface Go you should have some idea about how a hand-held PC feels like. But when we compare Microsoft Surface Go with GPD MicroPC we can easily come to the conclusion that the latter one is far advanced and practical than the former one. 6″ MicroPC is not only smaller than Surface Go but also has more interfaces. The entire device is only the size of your palm. It is only 15mm in its smallest part. Moreover, it weighs only 440g and will consume only 10W due to its thermal design.

The entire exterior is built using anti-shock aviation-level ABS synthetic. This material is flame retardant, high-heat resistant, and V-0 fireproof, with a Rockwell hardness up to 109 R, and bending strength up to 26000kg/cm2. Moreover, the screen itself, which supports 1280×720 resolution, is coated in Gorilla Glass so that the device can withstand unintentional drops. 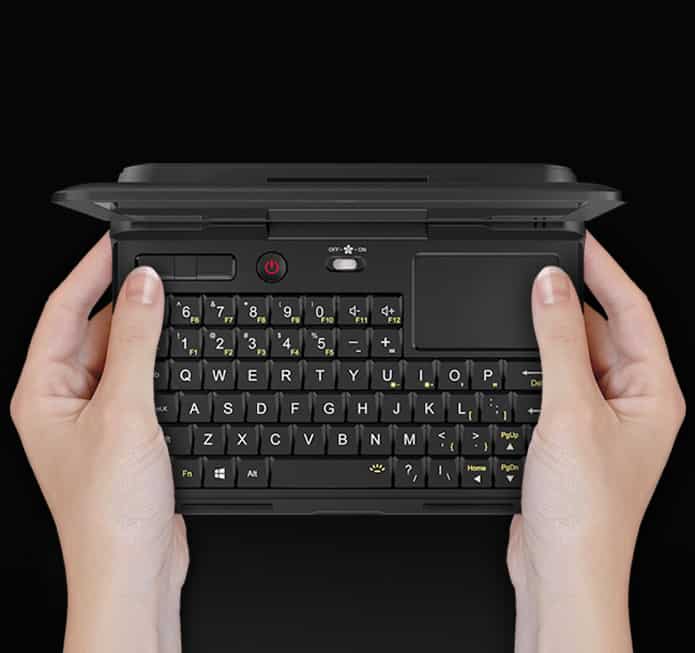 It’s So Easy to Operate

The MicroPC comes with three ways you can interact with it, A qwerty keyboard, touchpad, and 3D mouse. And needless to say, the gadget comes with RS-232 interface, which is a serial port most widely used in industrialized machines.

At many times you will find yourself having to work in a low-lit room. Moreover while working at night you will feel the need to shed light on the keyboard while you typing. Luckily, the MicroPC’s qwerty keyboard is backlit to meet the emergency needs at night

Being an industrial laptop, MicroPC also comes with the option of being embedded on any surface. You will find Two copper nuts slots at the back side of the MicroPC. Using the slots you can attach the entire gadget on any surface, be it a lift, a hanger, a stray or a bracket.