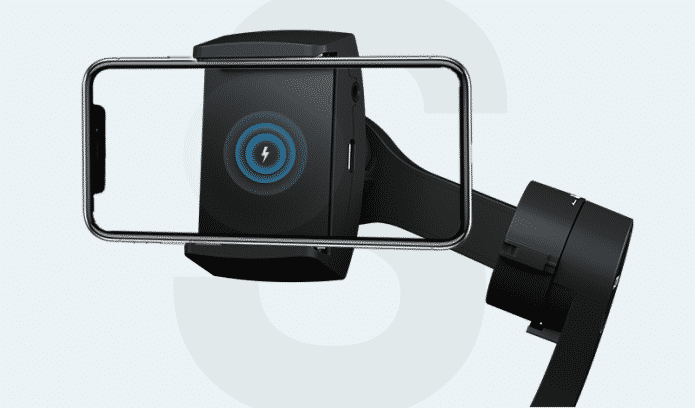 ATOM is the smallest 3-Axis smartphone gimbal with a foldable structure, which provides great portability, rich fantastic functionality and expanded App extensions. Although ATOM was built for Phone shooting, it can also be used with Action Cameras, such as GoPro Hero Series. In addition to that, ATOM also comes with a built-in mic interface for third-party microphones. There are a lot of 3-Axis Gimbals on the market. And it would be unfair to say they aren’t on the same level as ATOM. But here is how ATOM stands out from the crowd.
ATOM is a small gadget, on top of that, you can fold it to a smaller size. In fact, when it is folded it will take half the space as it would when it is fully expanded.

The gadget will fit straight right into your pocket. ATOM weighs only 440 grams, which is very low compared with other mounting gadgets. Its lightweight makes it the perfect gimbals for hand-held shoots. Moreover, you can expect other conventional Gimbals to be capable of carrying a payload of 220 grams, whereas ATOM can carry up to 310 grams, which is presently the highest in phone gimbals category. This means you can mount both your Smartphone and other Action Cameras on top of it.

ATOM And Its Handle

Now there isn’t anything special about the handle. But at first glance, you will notice a handful of buttons on it, each assigned a certain task.  In fact, you can use the buttons to control almost all the functions of the gimbal and Snoppa App. And almost all the shooting operations can be done with one hand.

For example, once you connect your phone to ATOM, you can control it via the buttons on it. For example, you can either pause or start the shoot by simply pressing a button. Also, in the app, you can freely define the slide button with zoom or focus function as per your need. There is another way you can connect ATOM to your phone, via the Snoppa App.

ATOM gives you three tracking modes. You will have Smooth Movement in its normal mode. However, using the Trigger button you can instantly lock the orientation of ATOM. You can also use Gimbal to track fast moving objects. Simply Click and hold the Trigger button to set ATOM to Fast Track Mode.

Moreover, you can switch back and forth between the Horizontal and Vertical shooting mode with ATOM, thanks to ATOM’s unique structure. You can change the orientation both by one-key click (set up in the app), or rotate it manually.

ATOM has more to offer than you think. One of the features that we liked very much is the Face and Object Tracking feature. If you are a one-man army, aspiring to be a YouTube content creator, or starting your own podcast, ATOM might be the only tool you need.

Once you tell the gadget what object or face you want it to track, it will always try to keep that inside the frame. And this is possible because there are no dead angles in ATOM. This means When performing face tracking or object tracking, there is no need to worry about the target exceeding the rotation range of the gimbal.

Only iPhone 4S Could Launched By Apple This Year