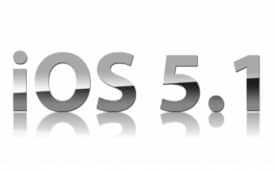 During the iPad launch event, Apple folks put an end to the rumors that have been doing rounds regarding iOS 5.1. Now, Apple had officially announced that iOS 5.1 is available now. The new operating for iOS devices has Japanese support for the voice-based assistant, Siri. The iOS users have been expecting iOS 5.1 for quite some weeks and now, there hopes have been realized. The Japanese support for Siri had been very eagerly awaited for by iPhone 4S users in Japan. Now, the support in iOS 5.1 is expected to bump iPhone sales in Japan.

The iOS 5.1 contains many other features too. Before the release, it had been hoped that there will be a slight change in home screen of iOS 5.1. And that has proved true. iOS 5.1 has a new home-screen where you get to have a camera icon. With the help of this, you can navigate straight to your camera instantly.

Now that iOS 5.1 is finally out, details have been leaked that Apple is already working on iOS 6. Apple has a knack of quite iterations and releases of it’s softwares and so, we may not have to wait too long for iOS 6. Rather, it is quite expected that Apple may unveil iOS 6 during the summer this year.

Fairphone – World’s First Ethical Smartphone – Is Up For Pre-Order