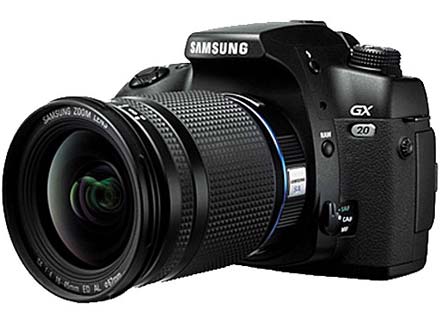 Samsung becames the latest in a series of camera makers to update their lines for the PMA photography show. At the top of the line, the GX-20 digital SLR is a close cousin to the similarly new Pentax K20D but with key differences; while it shares the same 14.6-megapixel, low-noise CMOS camera sensor as the K20D, the GX-20 includes a different on-camera interface and generates JPEG images differently than its Pentax sibling. The Samsung unit’s physical design is also different and sports a dedicated RAW shooting button that produces an uncompressed shot even when the camera is normally set to JPEG mode. 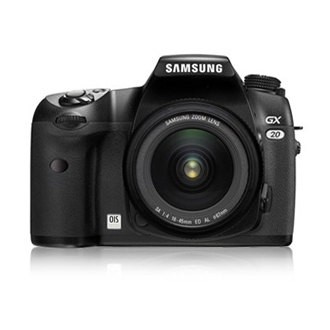 Even when you shake, you can’t turn back time to capture a moment that’s passed, and time doesn’t wait for you, but GX-20 takes beautiful pictures at every moment.

OIS (Optical Image Stabilisation)
The GX-20’s built-in OIS gives you clear, steady pictures in low light situations in which the shutter speed is slow, or even if you’re using a lens with no anti-shake function. 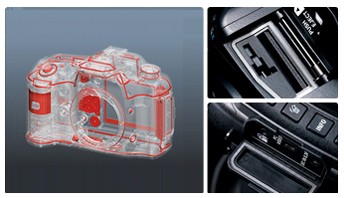 The weight of the GX20 unmistakably feels like a professional digital SLR body — heavy. Tipping the scales at 808 grams after we put in the battery and SD card, we wondered how we were going to lug this 14.6-megapixel camera around on a full day’s shoot. This is probably due to the solid build of the camera, which has a very comfortable hand grip.

The rear of the camera houses a nice 2.7-inch LCD. While large screens may be common in compact cameras, for dSLRs, it is still quite a new feature. The Live View looks sharp on the display, but we couldn’t autofocus in real-time. Instead, we had to press the secondary AF button , which will flip the mirror back down, focus, then return to Live View with a focused scene.

We plugged in the optional SBG-D1V battery grip, which has one battery slot and a compartment for a spare SD card. This may sound weird because grips from other manufacturers allow two batteries. But for the GX-20, it houses one battery in the main body and another in the grip. This is thoughtful of Samsung because photographers can continue to shoot even when the battery grip is detached from the camera.

After powering on the GX-20, the body vibrated for less than a second. For a while we thought the camera was alive. But no, it was actually the sensor-cleaning function shaking off any particles stuck on the CMOS sensor. 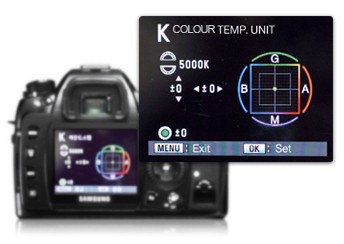 One tiny speck of dust on the image sensor can become a major flaw in your pictures. The GX-20’s image sensor features a special coating that resists dust and protects picture quality.

When the GX-20 is turned on, the image sensor vibrates to remove any dust that might be present. This effectively shakes off even the finest dust that may have rested on the sensor, resulting in flawless, clean pictures.
*Via the Menu, this feature can be set to Auto or Manual.

Specially built to prevent the intrusion of water or dust
Including the shutter button and dial, the GX-20 features 72 locations that are perfectly sealed with silicone to shield the camera’s insides from water, dust, sand, and other potentially harmful intruders.
Regardless of weather or environment, the GX-20 is designed to always enable a free and vibrant shooting experience. 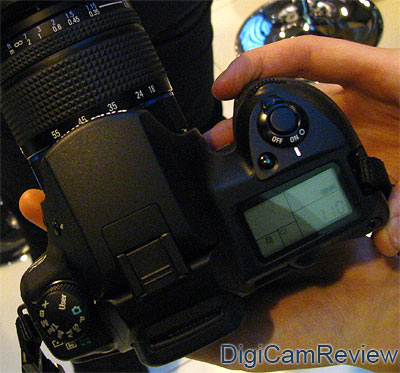 The flat button layout can be confusing as certain features are hidden and not clearly indicated. For example, in order to change the white balance (which took us a good 2 minutes to figure out), we had to press the Fn (Function) button first, which will call up a menu on the rear screen to change the settings for white balance, ISO sensitivity, drive mode and flash.

In SLR digital camera, images that go through the lens are reflected to the viewfinder. The vividness and visibility ratio of what you see are determined by how to use the reflective device. In conjunction with the Glass Pentaprism which is conventionally applied to advanced DSLR cameras, the GX-20’s broad and clear view offers a remarkable 95% of filed of view with 0.95X magnification ensuring a bright and clear view.

With GX-20’s bigger 2.7″ LCD Live View display, you can see scenes of dynamic beauty, such as dolphins jumping out of the ocean against the horizon. 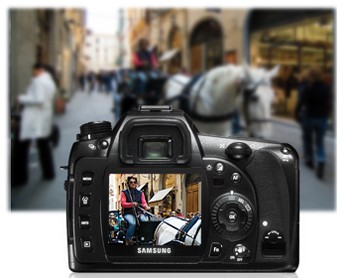 While most existing white-balancing functions use only standard values according to the situation, the GX-20 provides delicate, 100K step colour temperature adjustments which give a more accurate white-balance control.

The GX-20 measures 11 focus points to include subjects at different distances. Specifically, 9 central focus points adjust the focus accurately from any direction – vertically and horizontally. Two additional left and right focus points give the GX-20 great focusing flexibility. Also provided is the focus point converting function (by which a user can choose the location of the Auto Focus subject) and the super-impose function for adding a red highlight at the focus point. 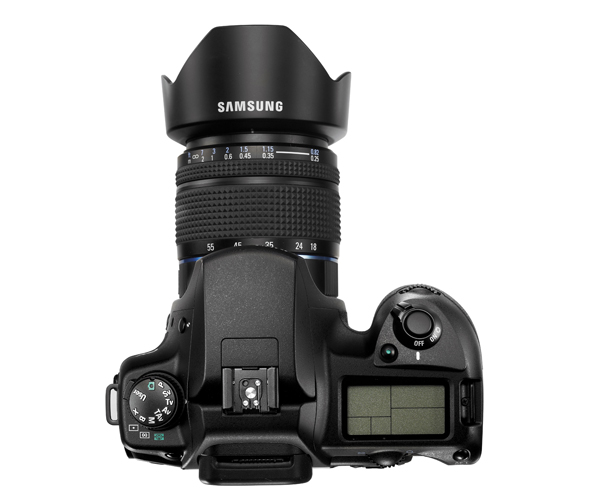 The ‘My Settings’ mode on the GX-20 lets you pre-select the modes you prefer to use most often. Modes such as Shutter Priority, Aperture Priority, Auto, Program, Manual and others.
Additionally in the P (program) mode, you can choose either Front E-Dial or Rear E-Dial, and you can use the functions faster and more easily with the Green Button to automatically adjust exposure during manual photography.
TV: Shutter Speed priority
Green Button: return to Auto mode
AV: Aperture Priority

While we shoot in JPEG format most of the time, there are occasions when we would like to capture a shot in RAW. Instead of having to sift through the menu, Samsung has placed a RAW button on the front of the camera. By pressing it, the next shot captured will be recorded in RAW (or designated formats via the menu).

One thing to note about the GX-20 is that while images are being copied to the card, you should not open the cover because it will transfer only the current image and delete the remaining pictures from the buffer. Unfortunately, these lost images cannot be retrieved.

The GX-20 provides a multi-exposure shooting function that shows 2 – 9 photos on one screen while shooting. This facility allows difficult tasks such as editing and digital collages to be handled much more easily.

Simply turning a dial level enables you to check the depth and ISO of a photo without consuming any memory. You can easily predict how your photos look with the Digital preview.

Automatically controls ISO sensitivity to get an appropriate exposure value according to the user’s shutter speed and aperture settings.

The interface looks similar to Apple’s Aperture (also an image-editing program/RAW converter for Mac machines), with the most commonly used functions located at the left and top of the screen. There are several preset modes which we found interesting, one of which is the Nostalgic Toy Camera picture-style setting. By clicking on it, your image will look like it was taken by the Russian 35mm Lomo camera.

Samsung has gotten its formula almost right with the GX-20. However, one factor that puts the Korean company at a disadvantage is the sparse number of lenses and accessories available compared with other manufacturers. But it’s clearly not slowing down, promising to announce the successor to the GX-20 and six more optics at Photokina in Germany later this year.

See The Largest Asteroid Ever Photographed From Up Close

Stanford University Is Opening A New Library, And It Has No Books