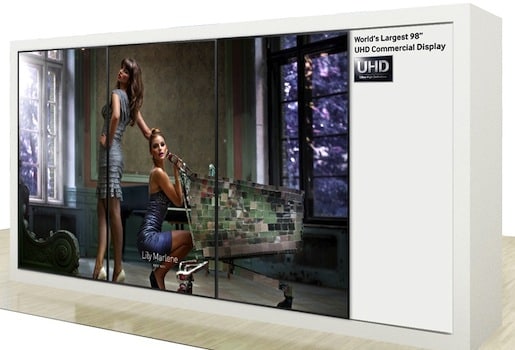 Most of the electronics tradeshows take place during fall every year. This year, too, we are sure to see many new, cutting-edge technologies and electronics from different companies. Reports have it that Samsung is gearing up to show off a 98-inch Ultra HD wall during the upcoming IFA 2013 event. Last year, we saw a whole lot of 4K displays from the likes of LG and Samsung. We also witnessed many new and huge displays at the CES event earlier this year. At IFA 2013, both vendors are going to ramp up the competition and come up with better, larger displays.

As far as Samsung is concerned, it has been confirmed that the company plans to unveil a 98-inch Ultra HD ‘video wall’ at the IFA 2013 show this year. Moreover, the company is also readying a 31.5-inch Ultra HD monitor at the event.

The ‘video wall’ does seem huge and it remains to be seen if any of the other electronic giants decide to offer a counterpart of their own. We also expect the screen resolutions to get larger and finer in the displays to be unveiled this year. To catch real-time coverage of IFA 2013 and other electronics tradeshows this fall, stay tuned to our site.