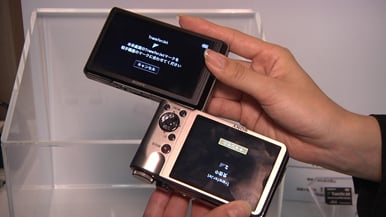 The first laptop containing the new TransferJet short-range wireless system on Saturday. Sony hopes TransferJet will replace cables for shifting data between gadgets, but the technology’s success will depend on its use in products from the big-name consumer electronics companies that have pledged to support it. TransferJet, under development for more than two years, works over a distance of up to 3 centimeters. Its speed is supposed to rival USB 2.0 and because of its short range its developers have opted not to implement the device pairing and security set-up functions of other wireless systems such as Bluetooth.

The first products to support it—Sony’s Vaio F laptop and TX7 and HX5V digital cameras—will be launched in Japan on Jan.

To send pictures between cameras, a user initiates sending on one camera, brings it close to the receiving camera and the rest happens automatically. During the demonstrations it worked well, accomplishing the transfer of pictures between cameras and from a camera to a photo frame and PC in just a few seconds. It appeared easy to use and required little work from the user.

There’ll be no TransferJet chip in the first Cybershot cameras to support the technology. Instead, the radio chip will come in an optional 8GB Memory Stick card so users will be required to purchase the card if they want to make use of the functions in the cameras’ firmware. The card will cost $100, a $30 premium on a similar card without TransferJet.

Sony will also launch a TransferJet USB adapter. It demonstrated this on Monday, connected to a Bravia TV and digital photo frame receiving images from a camera. The TJS-1 adapter will cost $150.